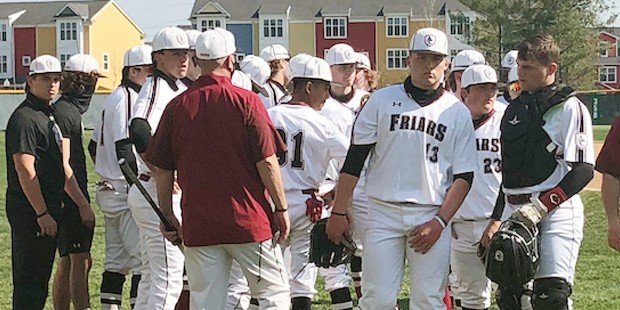 Archbishop Curley, which was shutout on Tuesday by Archbishop Spalding’s Noah Mrotek, was held scoreless through seven innings on Thursday at McDonogh School, but the Friars broke through for two runs in the top of the seventh inning and pitcher Ryan Edmonds went out in the bottom of the inning and completed a no-hitter, as Curley rebounded from Tuesday’s setback with a 2-0 win in Owings Mills.

Edmonds was overpowering as he blanked the Eagles on just 94 pitches, striking out 11 and walking three. He did struggle in the seventh, hitting the leadoff batter and walking the next one to create a jam. However, he responded by getting a fielder’s choice grounder and back-to-back K’s to complete his no-no.

Tristan Schoendienst started Curley’s two-run seventh with a one-out single and he scored when the next batter, Harry Middlebrooks, tripled to left. Catcher Zach Gaeta plated Middlebrooks with a single to add some insurance.

Jack Bussard made the start for McDonogh (0-14 overall, 0-13 MIAA A) and was impressive through six shutout innings. He scattered seven hits, walked three and struck out four Friars. Jack Jacobson came on in the seventh for the Eagles and was touched for the two runs to take the loss.

Curley (15-4) improved to 9-4 in the MIAA A Conference where the moved back into sole possession of second place.

Calvert Hall moved coach Lou Eckerl to the doorstop of history, Tuesday, as they delivered career win No. 499 for the coach with a 2-1 home win over Gilman and their ace pitcher Peter Heubeck.

Of all the game’s runs were scored in the first inning, before the pitching settled in for both sides.

Ryan Martinez led off the game for Gilman with an infield single and came around to score on a one-out single by Casey Bishop as the Greyhounds grabbed an early 1-0 lead. Martinez moved into scoring position on a sac bunt by Collin McPherson.

The Cardinals took advantage of some early wildness by Heubeck to manufacture their runs. Jake Butler took Heubeck to a full count before being hit by a pitch with one out. Butler then stole second and later moved to third on wild pitch. Heubeck went full again to catcher Lamar King, but got him looking for the second out.

The Cardinals remained patient and John Harris drew a walk on another 3-2 pitch, before stealing second. Jannuel Wispi-Robles was the next batter and he fell into an 0-2 hole. Wispi-Robles then hit a two hit chopper to the third base side of the mound. Heubeck gloved hit, but threw high to first, as both Cardinals runners aggressively raced home.

Scott Borgmann pitched five strong innings for Calvert Hall to earn the win. He took to the mound to start the sixth, but before he could throw a pitch in the inning, Eckerl brought in Ryan Seifert, who finished off the Greyhounds over the final two innings. Heubeck went the distance for Gilman, allowing just three hits.

Calvert Hall (11-6 overall, 7-6 MIAA A) will seek to get Eckerl’s 500th win on Tuesday when the Cardinals visit Archbishop Curley. Gilman (9-7 overall) is now 8-5 in the league as they look to snap a two-game losing streak when they visit St. Mary’s in Annapolis on Monday.

Technically, Archbishop Spalding had their area best 10-game winning streak snapped on Wednesday when its non-league game at St. John’s College (DC) was called, due to darkness, after 11 innings with the teams locked in a 3-3 tie. However, the Cavaliers unbeaten streak marched on Thursday, as they returned to league play and dispatched visiting St. Mary’s, 12-1, in five innings Spalding.

The first place Cavs (16-3 overall, 11-2 MIAA A) held a 5-1 lead when they came to bat in the bottom of the fifth and busted open the game with a seven-run inning.

Thomas Joseph was 2-for-2 with two triples and two runs scored, while Caleb Estes, Kyle Garrett and Matt Gormley all doubled for Spalding. Garret had two hits and four RBI, while scoring once and the Cavs got two RBI each from Ben Wieman and Brady Hannon.

Parker Thomas went the distance on the mound, scattering four hits over five innings. He struck out seven and the lone run he allowed was unearned.

In Irvington, Mount St. Joseph won its second straight and its third in its last four, Thursday, as the Gaels defeated Loyola Blakefield, 8-3, scoring all eight runs in the bottom of the sixth inning.

Heading into the bottom of the sixth, Loyola’s Stephen Schenning was blanking the Gaels on one hit, but MSJ pinch hitter CaMuary Arrington led off the sixth and reached on an error and was doubled home by Tanner Vincendes. Vincendes then reached third on a passed ball and scored on a sac fly by Zach Wainio.

Still leading 3-2, Schenning hit the next batter Josh Lantz and was relieved by Jack Belbot. Belbot struck out the first batter he faced for the second out, but walked the next batter before two runs scored on an infield error, giving the Gaels a 4-3 lead. Will Gunderson then singled in two runs for St. Joe and Arrington knocked in one more with a triple, before scoring the eighth and final run on the third Loyola error of the inning.

Patrick Bauer, who came on in the fourth, earned the win with for St. Joe (10-5 overall, 7-5 MIAA A) a scoreless seventh. He allowed three hits and struck out six in 3.1 innings of work.