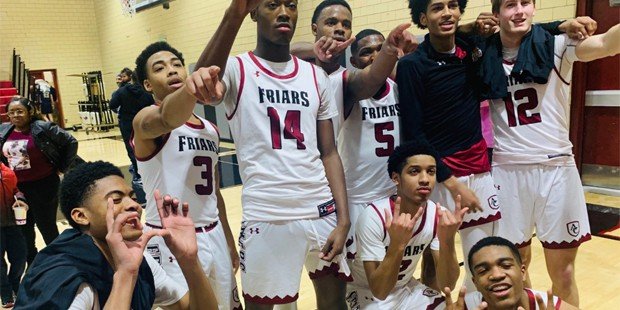 Brandon, who was a force on both ends of the floor, brought the energy indeed. 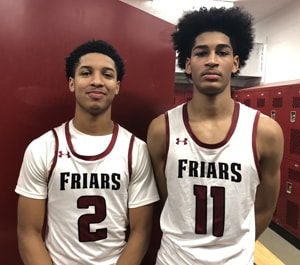 Seniors Caleb Johnson (left) and Dalyn Brandon combined for 29 points to lead Archbishop Curley to a dominant win in the MIAA B Conference semifinals.

He scored six points in the opening quarter, including a powerful two-handed flush to finish a break, as top-seeded Curley blanked the visiting Yellow Jackets in the opening quarter (15-0) and built a 21-0 lead before Chapelgate scored its first point with six minutes, three seconds left in the second quarter. The Friars added another 14-0 run in the second half as they rolled to a 64-35 victory and a spot in Sunday’s MIAA B Conference Championship Game.

“We knew what we were playing for, so we wanted to have that energy right from the jump,” said Brandon, who added seven markers in the third quarter to finish the contest with 13 points. “That’s what we had to do is have energy.”

Brandon started the scoring with a put-back basket. After a pair of free throws by Caleb Johnson and a short jumper by Josh Knapp gave Curley a quick 6-0 lead, Brandon got out on the break and brought a loud and supportive crowd to its feet by slamming the ball through the cylinder.

The Friars did not rest on their laurels in the second half.

Chapelgate (15-18), which was paced by Zach Knox’s 13 points, twice got within 17 points early in the third quarter, but Curley was relentless. Johnson, a senior who led the Friars in scoring this season, scored the last two buckets of the third quarter and scored seven points at the start of the fourth quarter to net 11 points in a 14-0 Curley run which left the Friars with a 33-point bulge, at 56-23, their biggest of the night.

“Coach said keep our foot on their neck and act like its 0-0,” said Johnson of the Friars’ drive to maintain their intensity for four full quarters.

“It was our game plan to come out and stick to what we wanted to do defensively and pressure them a little bit,” said Curley coach Darnell Hopkins. “We got the job done and I could not have been more happy with those guys in the first quarter.”

Veteran Chapelgate coach Frick Frierson said his team came in with confidence, but never found a way into the battle.

“We were 13-for-43 from the floor, under 30%, and we just got in a hole at the beginning, 21-0,” said Frierson. “It was so discouraging because, coming in, you think you can win the game. The last time we played them, it was a bad first quarter, but we came back twice. Our guys were still thinking this was going to be a rerun and we were going to get back into the game. The bottom line is we could never get a shot or get anything going.”

Hopkins explained what it will take to be successful in the finals.

“The same thing we did today – take care of the defensive end,” said Hopkins. “I have been nitpicking with them all season about their defense, when they were lacking or being lazy. They showed no signs of that today, so we’ve got to keep that up. If we keep that up, we’ll be fine.”

Hopkins, who won MIAA and BCL titles in the early 2000’s while playing at Towson Catholic with future NBA superstar Carmelo Anthony, before going on to star in college at Murray State, would love to see his players experience a championship.

“To me, it would mean a lot to have them guys win it,” added Hopkins. “Honestly, I’ve told them all year I want this for them. I’ve gone to college and won championships and my other coaches have been to the same place. I want them guys to have that feeling.”