Curley continues to score in bunches 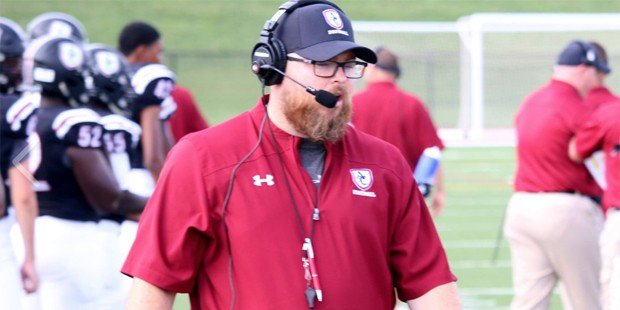 Archbishop Curley scored more than 40 points for a third straight game, Friday, as the Friars remained undefeated with a 45-7 rout of visiting Severn, in MIAA B Conference football.

Curley’s first score came on its first offensive snap, as Severn fumbled a punt attempt to give the Friars a first-and-goal at the Severn two. From there Jacob Biggs scored on a QB sneak and it was 7-0, less than two minutes into the game.

Later in the first quarter, the Friars’ lead grew to 10-0 on a 27-yard field goal by Josh Knapp.

In the second quarter, Julian Howard scored on a 28-yard counter run and Devin Thompson scooted 6-yards for a score, stretching the Friars lead to 24-0. Thompson then capped the half with a huge play as he caught a pass from quarterback Kofi Kwaw on the left sidelined and raced all the way to the end zone for a 71-yard TD reception, sending the Friars to half with a 31-0 lead.

Kwaw came up with another deep throw, connecting with junior John Munk with a 64-yard completion that setup a 1-yard TD run by junior Ronald Clark, which put the Friars up 38-0 and started the running clock.

Early in the fourth quarter, Severn’s DeVaugh Joyner intercepted a pass from Curley’s Biggs in the Friars’ end zone for the Admirals only touchdown of the game. That temporarily stopped the running clock, with the score 38-7.

Curley responded with a 1-yard touchdown run by Clark to set the final score.

Next Saturday, Curley will take on a challenge as it takes its unbeaten record to Gilman of the MIAA A Conference, before returning home the following Friday to host St. Mary’s in what will be an important B Conference contest.

Pictured above: Curley football coach Brendon Ireton has his Friars off to a 3-0 start.