Curley and McDonogh to meet for MIAA A soccer championship 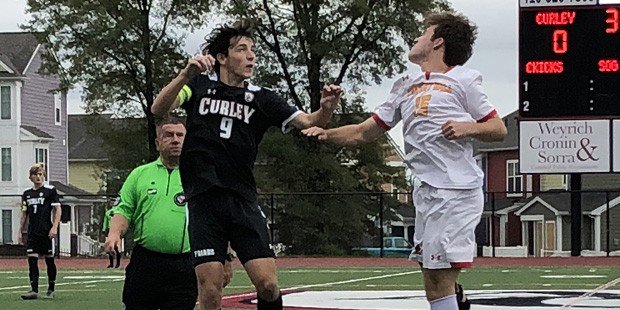 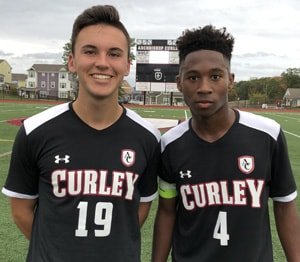 Top-ranked Archbishop Curley did not begin the 2019 season as the league favorite in MIAA A Conference soccer race. In fact, some rated Coach Barry Stitz’s squad no better than fourth or fifth in the league.

Once the season got underway, however, the Friars, relying on a deeper more balanced roster than most expected, dominated their rivals with a 12-1 conference record as they ran away to the Black Division crown. The only thing that stood between the Friars and a place in Sunday’s league championship game was No. 5 Calvert Hall, Curley’s semifinal opponent on Thursday in East Baltimore and the only league rival to top the Friars this fall.

The Cardinals (11-5-2), playing without senior star Ben Bender, who injured his left knee in last Friday’s quarterfinal win at No. 3 Mount St. Joseph, gave Curley (16-2-1) all it could handle in a gutsy end-to-end effort, but the Friars had just enough to get past their old rivals, 1-0, and advance to Sunday’s championship game, providing a much appreciated 50th birthday gift to their head coach.

No. 2 McDonogh, winners of the last two league championships and four of the last six, will be Curley’s opponent at CCBC-Essex at 5:30 p.m. on Sunday. The Eagles advanced with a hard-fought, 3-2, win over No. 4 Loyola Blakefield, in Owings Mills, also on Thursday.

Curley, which had practiced all week with the intention of slowing Bender, who had a goal and an assist in Calvert Hall’s 3-2 win over the Friars in the Rief Cup two weeks ago, had to adjust to a more defensive minded approach by the Cardinals which relied on aggressive counter attacks. In the first half, the usually fluid Curley attack appeared frustrated, but once the game opened up in the second half, both sides created numerous dangerous opportunities.

Ultimately, Curley was the only team to finish one of those opportunities, on a beautiful play seven minutes into the second half, as senior Bryce Woodward came up big for the Friars.

Junior Brandon Holy initiated the play from the back, driving a long ball some 40 yards in the air over the top of the Calvert Hall defense where it was met by a streaking Woodward. The run provided Woodward with a one-on-one chance with Calvert Hall goalkeeper Andrew Levis. On the right side, Woodward dribbled a couple of strides before rolling a low, hard right-to-left shot in front of Levis and into the goal.

“The game started out hectic,” said Woodward. “We didn’t play our best in the first half, and in the second half we knew we had to turn it up. [On my goal], I saw Brandon Holy cross the ball, and I knew it was going to go over the defenders head. I saw Levis, a great goalie, come out. I saw a defender on my left, and I knew I had to get it past both of them and it went in. Not having Bender was a crucial loss for them, but they battled hard and I have a lot of respect for them.”

Stitz said that he told his team (after they sang a chorus of “Happy Birthday” to him as part of the postgame celebration) that the win was the best present he could get.

“It was a great game,” said Stitz. “Hats off to Calvert Hall. They battled today and they played especially well without Ben Bender.”

Bender, who scored in regulation and then converted a penalty kick in Calvert Hall’s shootout win at St. Joe, had left that game with a left knee injury, but came back to help secure the win.

He has been receiving treatment ever since and had hoped to play against Curley as recently as Thursday morning, but Zinkand said they had to make the difficult decision to hold him out.

“After treatment yesterday and today, our trainer said it was not in Ben’s best interest to go today,” said Zinkand of Bender, who has a scholarship to play at the University of Maryland next year. “His knee was still puffy and he didn’t have great range of movement. He is a great player, a difference maker, and it would have been nice to have him. He has a great future ahead of him and we just didn’t want him to risk making it worse.”

“We we’re working on things to make sure that we knew where he would be on the field,” said Stitz of Bender. “He beat us the last time they were here with a goal and an assist.”

Even without their senior star, the Cardinals made themselves dangerous.

Michael Gisriel had two free kick blasts, from near midfield, which caught medal after skimming off the top the wall. The first was punched into the cross bar by Curley goalie Chris Denholm and the second clanged off the left post. In addition, Cardinal senior Sean Barwick, who hit the game winner agains the Friars two weeks ago, nearly tied the contest with four minutes to play when he struck a 12-yard shot which drifted wide left.

Curley senior defender Kenny Clapp also had a shot deflected off the cross bar by Levis and Holy’s long throw-in bounced free in the box for a couple of tantalizing seconds before being cleared by the Calvert Hall defense.

Zinkand gave credit to Curley for getting the goal.

“I told my team after the game, that I was extremely proud of the effort,” said Zinkand. “We hit the bar twice today, but we couldn’t quite get the bounce that we needed. They played their hardest, and that’s all I could ask.”

“It was windy, the field was wet, and they were buzzing,” added Stitz. “We didn’t play that well in the first-half, and my halftime message to the team was to find a way to win the game and they did.”

In Owings Mills, McDonogh (14-4-1) saw the visiting Dons erase a 2-0 Eagles’ lead with a pair of second half goals before junior midfielder Richie Nichols saved the day for McDonogh with his second score of the day.

The winning goal came when Nichols dribbled himself open at the top of penalty box and drilled a hard shot inside the left post, with more than 13 minutes to play in the second half.

Mason Christian, with an assist from Nichols, had staked McDonogh to a 1-0 lead early in the first half and the Eagles appeared as if they might coast to Sunday’s final when Nichols got his first score, 10 minutes into the second half.

The Dons (11-5-2), however, did not let any time waste getting back into the contest, as Dominic Caltabiano countered, less than a minute later. Less 10 minutes after that Chase Llewellyn score on a tap in to tie the game at two and suddenly, Loyola was on the offensive, nearly scoring the go-ahead goal on several occasions.

The game remained wide open after Nichols’ second score as Loyola pressed for the equalizer which never came.

In its only meeting with McDonogh this season, Curley defeated the Eagles, 3-0, at Curley on Oct. 7th.