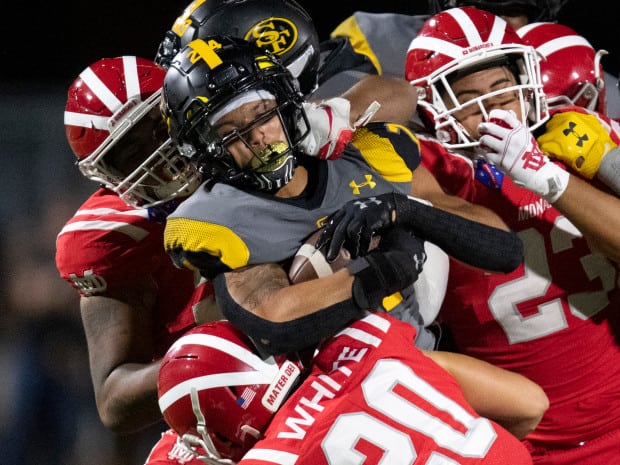 Instead, the Panthers got a dissertation. California’s Mater Dei defeated the area’s No. 1 team, 34-18, at St. John’s Bosco, outside of Los Angeles.

Senior quarterback Bryce Young scored four touchdowns for Mater Dei (4-0 overall), the nation’s No. 1 team by MaxPreps and last year’s top-ranked team in USA Today’s Super 25. Blake Corum rushed for 181 yards and a touchdown for St. Frances (3-1), which came in No. 2 by MaxPreps.

In arguably the most anticipated game on the national high school football slate so far this season – game was listed on some betting boards in Las Vegas – Mater Dei stymied St. Frances’ offense while Young produced a career night against the Panthers’ defense, ending the East Baltimore school’s 26-game winning streak. St. Frances last loss in 2016.

Young, who’s committed to Southern California, rushed for 104 yards and four touchdowns and threw for another 247. His ability to scramble (104 yards was a career-best) and throw the ball quickly kept St. Frances, which allowed 13 points in its first three decisions, off-balance.

Mater Dei went 98 yards for the game’s first score, capped with a 1-yard run by Young, who completed eight throws for 81 yards. The Monarchs needed just three plays and 40 yards to find the end zone again as Young scampered 12 yards into the end zone, for a 14-0 advantage in the opening quarter.

St. Frances (No. 4 in USA Today’s Super 25) answered with an 8-play, 80-yard drive, with Osman Savage completing the series with a 2-yard touchdown run. Young got his third rushing score, this time from 13 yards, giving Mater Dei, ranked No. 2 by USA Today, a 21-6 halftime lead.

Corum, a Michigan commit, broke free for a 54-yard touchdown. Other than Corum, the Panthers’ offense was non-existent Saturday as sophomore quarterback John Griffith (10-of-16, 127 yards) struggled.

St. Frances, which prior loss was to Florida’s IMG Academy, has become a national power after being a middling MIAA A Conference program. The Panthers are playing an independent schedule for a second straight season.