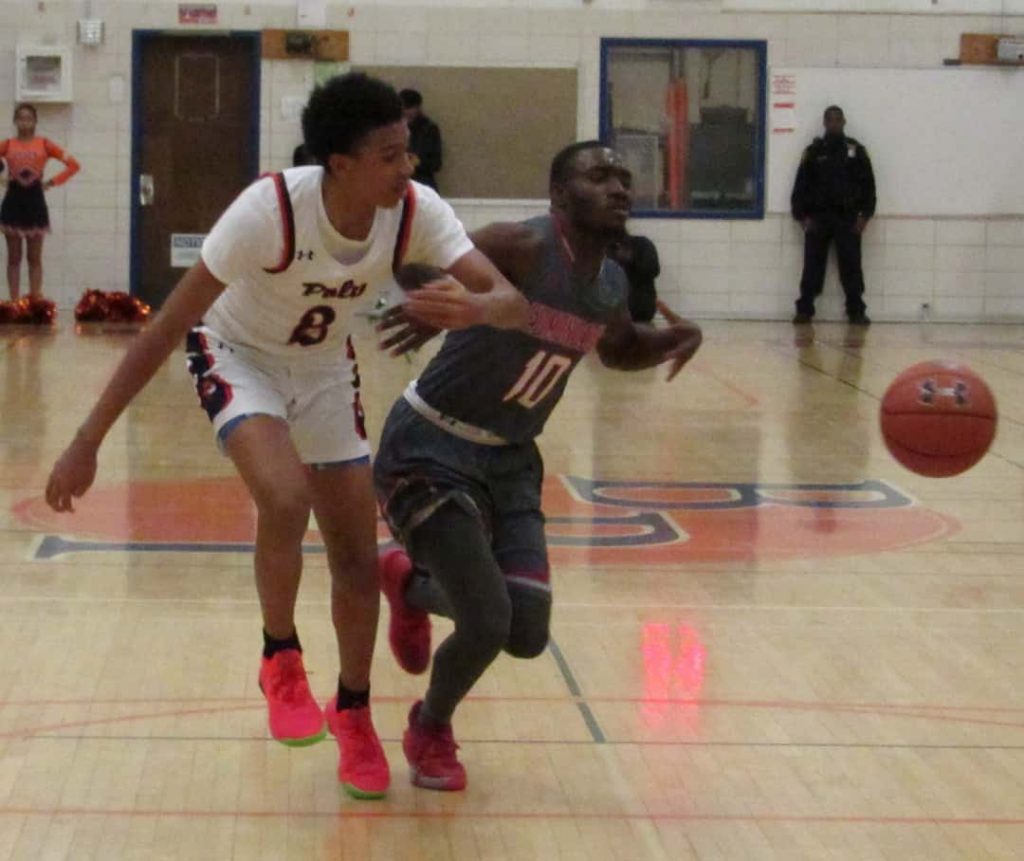 Poly’s Bryce Lindsay (left) knocks the ball away from Edmondson’s Daniel Frink during Tuesday’s Baltimore City boys basketball contest. The top-ranked Engineers improved to 13-1 with an 83-37 victory over the No. 5 Red Storm in North Baltimore.

Poly High boys basketball felt slighted when it wasn’t recognized in national preseason rankings. The Engineers are getting recognition and don’t plan on stopping.

The Cold Spring Lane school, ranked No. 19 nationally by ESPN, only trailed after the opening basket and put up a running clock on the Red Storm (13-3 overall). Freshman forward Kwame Evans Jr. finished with 11 points.

With a showdown looming with St. Frances Academy, Poly is clicking on all cylinders.

“We know we’re the hunted in the city, but we come out as we’re the underdogs,” said Engineer senior point guard Rahim Ali. “We take no game for granted.”

“We had a mission from the very end of last season…we knew we were going to be a very difficult to deal with this year,” said Poly coach Sam Brand, whose team entered the latest MaxPreps.com national rankings at No. 24. “We had a goal of getting nationally ranked then climbing the national rankings. We feel like that we can beat any team in the country.”

The Engineers, whose only loss came against St. John’s College from the District (ranked 17th by ESPN and 22nd by MaxPreps), have buzz-sawed the area’s toughest public league, winning their seven decisions by an average of 48 points. Poly is 5-0 in Division I with National Academy Foundation, Reginald Lewis and Dunbar remaining.

The top team in Division I and Division II will play for the city title, Feb. 25 at Morgan State University’s Hill Field House. Undefeated and fourth-ranked City College and No. 7 Lake Clifton are currently tied for first in Division II.

After needing a Murray jumper in the final seconds for victory last year in West Baltimore, Poly, which handled Bishop Walsh and Pennsylvania’s Chester at the Stand Against Violence Showcase near Pittsburgh over the weekend, left little doubt Tuesday in North Baltimore. The Engineers ran off 17 straight points after the Red Storm scored the opening basket as Murray scored seven.

Edmondson shaved the lead down 22-13 with less than six minutes in the second, then Poly turned the local Top 5 match into a resounding mismatch. The Engineers’ ability to control the paint with Lewis (6-foot-6), Evans (6-9), Murray (6-4) and 6-9 reserve center Adam Walden led to transition baskets. Murray, Evans and Bryce Lindsay buried three-pointers in a 26-9 blast, leaving Poly with a 48-22 halftime lead.

“The chemistry on this team is unreal. We put each other in the right spots,” said Murray, who recently picked up a scholarship offer from DePaul. “When you have a point guard like this [Ali] getting people in the right spots and we all can pass the ball.”

Lewis, who surpassed the 1,000-point career mark Saturday, made it 64-29 in the third quarter Tuesday to start the running clock. Ten players scored for the Engineers.

“We got down early and didn’t fight,” said Red Storm coach Darnell Dantzler. “I can take a loss if we’re playing as hard as we can, but I feel we didn’t give a good team effort.”

“They’re relentless on both ends of the floor,” said Dantzler. “There’s nothing I can say negative about them, they just outplayed us.”

The Engineers take on National Academy Foundation, in a tuneup for St. Frances Saturday at Hill Field House, in one of the most anticipated games in Baltimore high school basketball in recent years. Last year, Poly overcame a nine-point fourth quarter deficit to beat the eventual MIAA A Conference and Baltimore Catholic League champions, 59-58, in front of nearly 3,000 at Towson University’s SECU Arena.

The Engineers are looking forward to matching up again with the East Baltimore private powerhouse, also ranked nationally (21st by ESPN).

“We’re going to treat it like a regular game. We’ll make sure we’re prepared,” said Murray. “Last year is last year, this year is a new year.”

“We got this rivalry for some years now and this is what we envisioned it,” said Brand, a former standout guard at Morgan. “It’s a great week for Baltimore high school basketball. To have two nationally ranked teams out of our city, public vs. private, so many different dynamics. I can’T wait to get it on.”