Cavaliers out for MIAA A crown 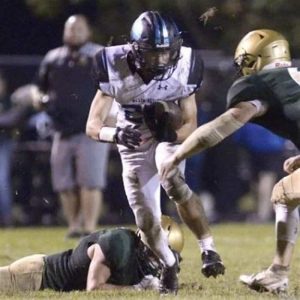 Nathan Mattingly will be key for Westminster’s running game in 2019. The Owls reached the 3A West Region playoffs last year.

Toughest 2019 opponent: Linganore. The Lancers are one of the state’s top public programs, reaching the Class 3A state final (lost to Franklin) after claiming the top prize in 2017. Defensive linemen and BTC Super 22 pick Dustin Keith will lead the Frederick school along with seniors Joey Bruscia (running back), Will Colletti and Ben Musselman (defensive backs) and juniors Scott Hummel (offensive line) and Cole Mitchell (defensive line).

Most intriguing 2019 opponent: Liberty. The Lions won the Carroll County Athletic League crown last season and will be the prohibitive favorite going into 2019. The Eldersburg school has one of the area’s top quarterbacks in senior Nate Kent, a BTC Super 22 selection along with linebacker and BTC Super 22 pick McClain Butler (linebacker), Kyle Hutchinson (wide receiver/defensive back), and Michael Spitz (wide receiver/defensive back).

By a number: 4. Westminster’s losses to Linganore over last two seasons.