Red Storm hoping to strike in 2019 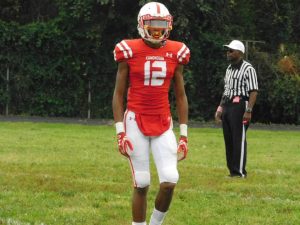 Barry Jones will be among the returnees for Edmondson in 2019. The Red Storm went 8-3 last season.

Overview: The Red Storm reached the 2A North Region playoffs last season, losing to New Town in the opening round. The Baltimore City school will be led by seniors Daniel Frink (running back/linebacker), defensive back Xavier Johnson, wide receiver/defensive back Barry Jones and running back Joseph Bright.

Most intriguing 2019 opponent: Mervo. The Mustangs reached their first state semifinal (Class 4A) last season after finishing second to Dunbar in Division I. Senior quarterback Kelin Kimbrough will lead the Mustangs, who’ve been either first or second in Division I the past five seasons.

By a number: 3. Consecutive losses by Edmondson after an 8-0 start last season.