Poets looking for another championship season 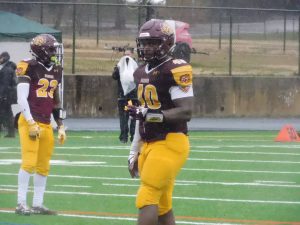 Deon Crews-Harris will be an anchor for Dunbar’s defense in 2019. The Poets repeated as Baltimore City Division I champion last season.

Overview: The Poets won the Baltimore City League’s Division I title in 2018, but was denied a shot at a second straight Class 1A state championship with a loss in the state semifinals. The Orleans Street school returns one of the city’s top players in senior running back/defensive end Deon Crews-Harris along with tight end/defensive end Joshua Carr and junior quarterback Derrick Dunn.

Toughest 2019 opponent: Mervo. The Mustangs reached their first state semifinal (Class 4A) last season after finishing second to Dunbar in Division I. Senior quarterback Kelin Kimbrough will lead the Mustangs, who’ve been either first or second in Division I the past five seasons.

Most intriguing 2019 opponent: Edmondson. The Red Storm will battle the Poets for the Ben Eaton Memorial Trophy. The Poets have won 10 of 12 including a 46-0 decision last season.