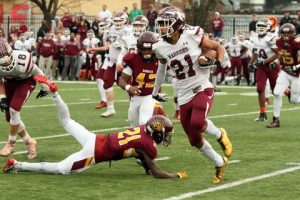 Jordan White was an all-UCBAC Chesapeake football performer at wide receiver and defensive back for Havre de Grace last season. The Warriors went 11-2 and reached the Class 1A state semifinals.

2017 review: The Warriors won the UCBAC Chesapeake championship and reached the Class 1A state semifinals for the third straight season. The Harford County school will have back all-Chesapeake first-team quarterback Alex Gresock, and wide receiver/defensive backs Jordan White and Christian Penrow for 2018.