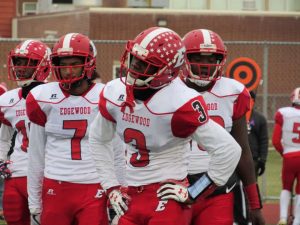 Deonte Banks (3) hopes to lead Edgewood football back to the Class 3A state playoffs in 2018. The senior wide receiver/defensive back is committed to the University of Maryland.

With practice for the 2018 high school football season a few weeks away, Varsity Sports Network’s Derek Toney takes a look at the regular season itinerary for select area teams.

By a number: 11. Seasons between postseason appearances for Edgewood.