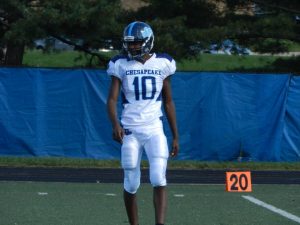 With practice for the 2018 high school football season a few weeks away, Varsity Sports Network’s Derek Toney takes a look at the regular season itinerary for select area teams.

Toughest 2018 opponent: Overlea. The Falcons reached the Class 1A South Region playoffs and tied for second in behind Chesapeake-Baltimore County in Division II. Overlea will have back one of the league’s top players in senior cornerback/athlete Jairus Cannon.

Most intriguing 2018 opponent: Hereford. The Bulls handed Chesapeake-Baltimore its only league loss, and reached the 2A North Region final last fall. Seniors Josh Aribamu (running back) and linemen James Crane, Sean Roeper, Zach Barnard and Jack Marshall are among the returnees in 2018.

By a number: 4. Chesapeake games decided by six or points less last season.