No leads were safe in the girls’ lacrosse showdown between C. Milton Wright and Fallston, Monday, as the two teams battled through four lead changes and five ties before the cougars could declare victory, 12-10.

“We talked before the game about each player being responsible for what they needed to do.  The second thing was that we had to play 50 minutes,” Fallston coach Michael McTeague said.  “We got up early and we couldn’t pat ourselves on the back.  This game was going to be played for 50 minutes and no less.”

Fallston jumped out to a 4-0 lead in early goings of the first half, much to the help of two-goal halves by Abby Wilson and Sam Nolan, but the Mustangs slowly chopped at the lead until they themselves held a brief lead in the half, 6-5.

But leads didn’t hold long in the game, and the Mustangs would close the first 25 minutes of play with a 7-7 tie against the Cougars.

“I felt like we got outplayed in every facet of the game in the first half,” Mustang coach Brent Ritz said.  “We were able to still succeed in putting the ball in the net, and that took us into halftime.  Props to them for getting it up there, but we continued to fight back.”

Two more ties would come in the second half, as well as each team holding a lead, but the Cougars took a final lead when Wilson completed her hat-trick with Fallston’s 10th goal, leading to the 12-10 victory.

“We just settled the ball, found the open girl and then hit the back for the net,” said leading scorer Nolan, who ended the game with four goals and two assists.  “It is what we do best.”

Scoring was certainly a priority for the Cougars, but the defense buckled-down in the second half, allowing just three goals and seeing some crucial steals from Katie Lazzer to corral the Mustang offense.

“They are a really fast team but we knew we had to stay on them on the transitions and look for the ball,” Lazzer explained.  “We had to keep pressure on them till they forced it over.”

Grace Deckert and Jordan Wagner teamed together in the Fallston goal, each playing a half, and combined for eight saves in the game.  Wagner finished her night with five saves in the second half.

“I think their goalie came up with a few saves and we had some poor shot selection,” Ritz said, seeing his team hold two leads in the game.  “Turnovers in the midfield hurt us, but I think that was due to the intensity of the ride.”

What didn’t hurt the Mustangs was the terrific performance from Megan Will, surpassing a hat-trick in the first half with four goals, and tagging on a goal and assist in the second half for her five-score night.

Added to Nolan and Wilson, Courtney Laubach finished with two goals for Fallston, while Heather Summers, Jenna Mosketti and Paulina Christ each scored once. 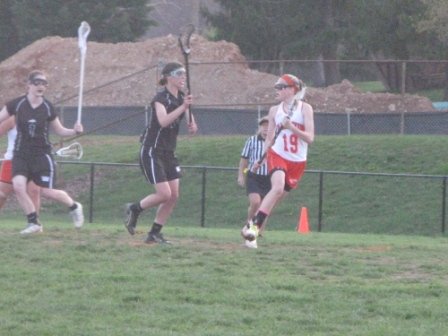 C. Milton saw added scores from Holly McKee and Katie Burgee, and two-goal games from Lauren Haggerty and Katie Gallagher.  The Mustangs will next face Aberdeen on April 28.

“We have a bigger goal than winning the county,” Ritz admitted.  “We have to prepare to move into states and give ourselves the best opportunity there.

“We feel that we left some unfinished business there last year, so we want to get back there and handle it.”

Fallston’s next scheduled game falls on April 25, when the Cougars travel to Bel Air to take on the Bobcats.

“We have to keep getting better,” McTeague said.  “We still have Bel Air, who can still cause troubles, so we are nowhere near finished.

“We have some tough games that will keep us on our toes, and we need to win out in Harford County for sure.”