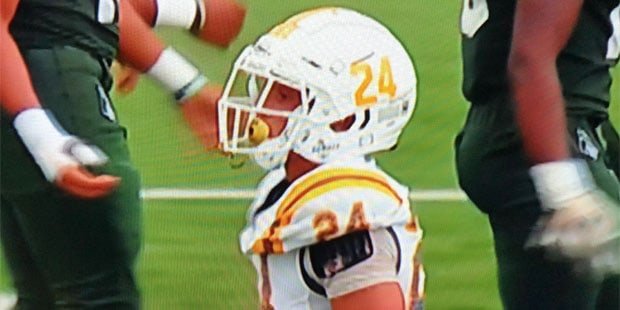 A 60-minute lightening delay and the oppressive Florida sun, not to mention a Top 20 nationally ranked opponent, did not slow the juggernaut that is the St. Frances football team, in its season opener Saturday afternoon in South Florida. The Panthers went on the road and routed Miami Central, ranked #1 in Miami and #15 USA Today’s Super 25, 49-13, for their 24th consecutive victory.

The Panthers produced a pair of tackles for loss and a safety on the game’s opening drive. After an interception by LSU commit Jordan Toles, which was returned inside the Central 10-yard line, was negated by a holding penalty on the Panthers, St. Frances’ pushed the Rockets’ punter out of the back of the end zone after he chased down an errant snap, giving the Baltimore squad a quick 2-0 lead.

The Panthers added to their lead early in the second quarter, when they marched 57 yards for their second touchdown of the game, a 22-yard pass to the flat, from Griffin to senior running back Blake Corum, who is committed to the University of Michigan. It was the start of a huge day for Corum.

The SFA defense got back on the scoreboard on the very next Central possession, as Oregon commit Luke Hill, a senior cornerback, jumped an out rout for a 23-yard pick six and the rout was on.

Central did get on the scoreboard, late in the second quarter, with a 52-yard touchdown run by Amari Daniel, but the Panthers responded quickly with a 16-yard toss from Griffin to Corum, with less than a minute to play prior to intermission.

Central picked up its second score early in the third quarter, taking advantage of a short field after St. Frances failed on a fake punt attempt. The Rockets drove 51 yards for the score, which came on a nine-yard strike from quarterback Katravis Marsh. The score was setup by a 42-yard completion by Marsh to Geovonni Ribalta.

Once again, the celebration was short lived and again it was Corum who answered.

On the first snap of the next possession, Corum broke free off the right side and made an outstanding cutback inside the 10 for a 69-yard touchdown run to push the Panther lead to 36-13. Several minutes later Corum added a six-yard touchdown rush to give the Panthers a 43-13 advantage.

St. Frances nose guard John Chambers also turned in a highlight, intercepting a pass at his own 30 and rumbling all the way down to the Central 25. That set the stage for Isiah Addison, who busted off left tackle, on the very next play, scoring on a 25-yard run to cap the scoring for the Panthers. That stretched the Panther lead to 50-13 and invoked the running clock with less than seven minutes to play in the contest.

Pictured above: St. Frances senior running back Blake Corum, who is committed to Michigan, celebrates after scoring one of his four touchdowns in the Panthers’ season-opening win in Miami.