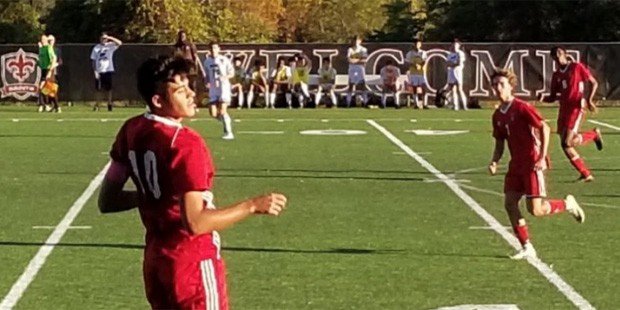 Saints and Quakers have split the last two MIAA B crowns

Concordia Prep and Friends School are starting to make a habit of meeting in the MIAA B Conference championship game and, after each school posted a semifinal victory on Thursday, they will meet in the title game for a third consecutive year.

On its Roland Park campus, Friends came out the blocks firing on all cylinders, pressing the Saints Peter and Paul team straight from the kick off, earning a corner kick in the first two minutes. The first corner kick was deflected wide, but from the resulting corner kick senior Alex Shine crossed it in back post to senior Christian barnes who headed home a goal from six yards out.

The Quakers continued to dominate in all departments but the visiting Sabres did come close on a quick free kick effort which caught the Friends backline off guard. However, sophomore goalkeeper Sam Whitman tipped the ball wide of the post.

Each team had additional first half chances from set pieces but the game went to intermission with Friends still ahead, 1-0.

The second half continued in similar fashion with the Quakers dominating the possession and, with 20 minutes left, a great team goal was scored by Friends’ senior Franklin Wagner.

The ball was played wide to senior Mason Marchetti, who held it up and allowed junior Auggie Wiggins to overlap and cross far post where Wagner fired home a left-footed half volley, far post and into the back of the net.

Saints Peter and Paul pushed hard late to find a way back into the game but Friends stayed calm and kept another clean sheet, which should not surprise most as they have only allowed 14 goals all season.

“Each year we just try to be organized and work hard for each other,” said Friends coach Philip Greatwich, who will be leading the Quakers into their third straight final. “If those two things happen consistently you’re in for a good season. We all have the same goal here and we all buy into the targets set, plus we have a lot of fun on the way. It’s a family mentality of ‘I’ll have your back and you’ll have mine’ and they’ll fight from whistle to whistle for one another.”

If Concordia wins back-to-back titles it will have to do something it has not bee able to do thus far this season — beat Friends.

The Quakers won both regular season meetings, 1-0 on Sept. 13th and 3-1 on Oct. 4th, yet the Saints still finished as the top seed in the B Conference with a 14-2 league record. Friends finished 12-4 in conference play.