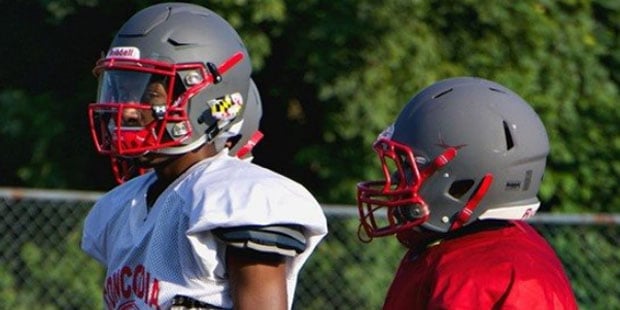 Carter throws for two scores and rushes for two more

Concordia Prep, which is making the jump to the MIAA B Conference for football this fall, opened the 2019 season in impressive fashion on Thursday, defeating visiting John Paul the Great (VA), 56-0, behind the playmaking of junior quarterback Justin Carter.
Carter was efficient in completing 7-of-11 passes for 115 yards and two touchdowns, while rushing six times for 112-yards and two more scores.
Junior Ryan Steinbarg also surpassed 100 yards rushing, with 101 on on 11 attempts, and he scored a touchdown. Sophomore Keenan Gilchrist added 77 yards rushing and a touchdown freshman Lamar Heath took his only carry of the day 62 yards for a TD. In addition, sophomores Cliff Gillis and Everett Dingle combined for three catches and one touchdown each.
Concordia leaps into the meat of its MIAA B schedule on Friday (4:00 p.m.) when it travels to Brooklandville to face St. Paul’s.
Pictured above: Concordia Prep junior quarterback Justin Carter (left) helped the Saints get off to a fast start in 2019, leading the way to a 56-0 victory in the team’s opener.