Concordia football introduces itself to the MIAA B Conference 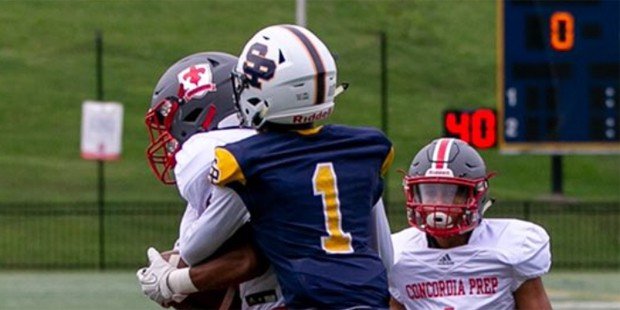 Concordia Prep football, just up from the now defunct MIAA C Conference, made its debut in the MIAA B, Friday afternoon in Brooklandville, and the Saints were impressive during a 35-14 rout of St. Paul’s.

Concordia’s defense made a big statement against the usually prolific Crusader offense, producing seven sacks and a pick-six interception, which made life easy for the Saints offense which repeatedly went to work with great field position.

Junior linebackers Keith Bagwell and Charles Turner combined for 18 tackles and Bagwell had a sack. Freshman defensive end Corey Broome and sophomore lineman Kogge Metuge had two sacks each, while sophomores Jaden Perez and Sone Metuge had one each. In addition, defensive back Everette Dingle returned his interception 85 yards for a score. He also contributed six tackles.

Junior running back Ryan Steinberg led the Concordia offense with 72 yards on 18 carries and three touchdowns. Junior quarterback Justin Carr ran 11 times for 116 yards and a score and also passed for 162 yards. Senior Davion Ames also had a big afternoon for Concordia, catching three passes for 62 yards and recoding seven tackles on defense.

Concordia Prep is now 2-0 overall and 0-1 in the B Conference. St. Paul’s is off to an 0-2 start with both losses coming in conference.