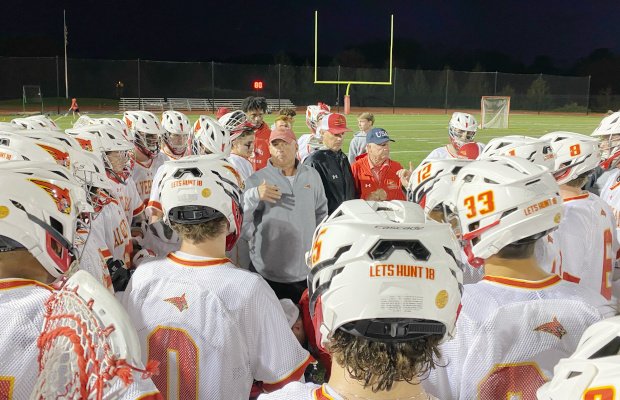 The Calvert Hall lacrosse team found themselves in unfamiliar territory Friday night. The perennial A conference contenders were reeling from early season injuries, a disappointing 1-3 start in league play, and a surprising 8-7 road loss to John Carroll on Tuesday. 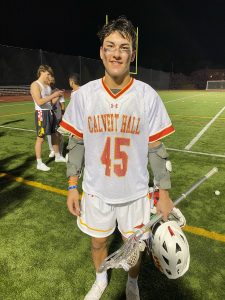 Calvert Hall’s Jordan Wray scored the game-tying goal with just 1:07 to play and the Cardinals got the game-winner from Truitt Sunderland, seconds later, in their 9-8 win over McDonogh.

McDonogh’s standout junior attackman McCabe Millon (Duke) had just put the Eagles up 7-3 with his third goal of the game halfway through the third quarter, and senior goalie Anthony Wilson (Villanova) was suffocating the Cardinal’s offense with an amazing array of saves.

The Cardinals needed something. They needed to “compete.”

“Our kids never stopped, they competed. I always put five keys to the game up on the board, and I erased the five keys before we went out on the field,” said head coach Bryan Kelly. “And I just wrote one word – compete.”

McDonogh, now 3-3 needed this game too. Every team in the A Conference is now chasing St. Mary’s, who stayed unbeaten at 5-0 with a dominating performance against St Paul’s, winning 13-5. The Crusaders fell to 2-4.

Trailing 8-6 late in the fourth, junior midfielder Wyatt Hottle brought the large home crowd to their feet when he found the net with 3:14 remaining to pull the Cards within one. Strickland secured another faceoff (he was 16-for-21) and after being denied by Wilson time and again, senior middie Jordan Wray (Georgetown) finally pulled the Cards even when he dodged, penetrated, changed hands and deposited a nifty left handed bouncer with 1:07 left. “We were clicking on offense. I saw the shot and I just rolled back and gave it everything I had,” said Wray.

The Calvert Hall faithful were erupting, and the stage was set. With 14 seconds remaining, senior attackman Truitt Sunderland (UVA) brought the ball from behind the net, cut across the crease and flung in a low-to-low dart to send the crowd into a frenzy.

Coach Kelly was elated to see his squad compete.

“We hadn’t been tough. The guys didn’t understand what it meant to win. They didn’t realize it takes a lot of work. It’s hard to win in this league… you got to bring you’re A game every single game.”

“It was a great high school lacrosse game,” said McDonogh head coach Andy Hilgartner. “Both teams feeling like they really needed this win. Everybody left it all out on the field. Calvert Hall made a couple plays at the end that we didn’t, and in these types of games that’s what it takes.”

Calvert Hall senior defender JK Kelly (Cornell) was tasked with covering the ultra-talented Millon (4g, 1a). Asked what it’s like to cover the best attackmen in the Mid-Atlantic twice a week, Kelly replied, “The MIAA – there’s nothing like it. It’s fun.” Kelly also described what enabled the Cards’ fourth quarter comeback. “We competed.”