No. 12 Catonsville holds off Hereford for top spot in Baltimore County boys lacrosse 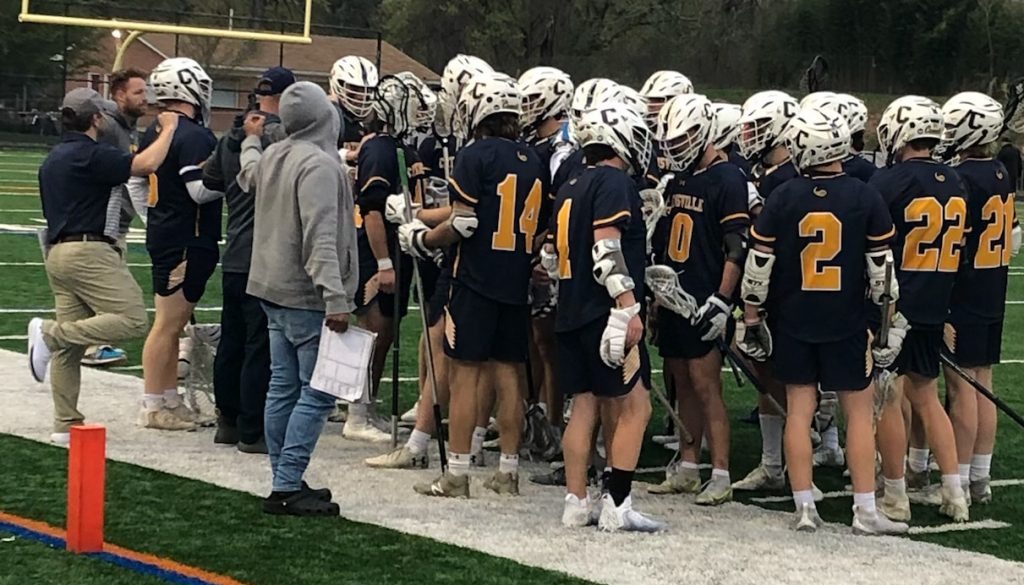 Still perfect: Catonsville boys lacrosse discuss strategy before Thursday’s key Baltimore County Division I contest with Hereford. The 12th-ranked Comets improved to 9-0 with a 7-6 victory over the No. 13 Bulls in Parkton.

If Thursday’s boys lacrosse contest between Catonsville High and defending Class 2A state champion Hereford is a preview of a potential Baltimore County championship matchup next month, now is the time to buy tickets because the squads put on an instant classic in Parkton.

On Hereford’s Senior Night, the 12th-ranked Comets built a three-goal fourth quarter lead, then withstood a furious late comeback by No. 13 Hereford for a thrilling 7-6 victory in a Division I match.

The Bulls trimmed the deficit to one with 30.2 seconds remaining on a fastbreak goal by senior defender Nathan Van Note. Catonsville junior Nathan Wess secured the faceoff for his squad, but instead of running out the clock, the Comets (9-0 overall, 3-0 Division I) turned the ball over.

Hereford patiently worked the ball around in the final 20-plus seconds, looking for the tying goal, but a hard hit by Jack Krug jarred the ball loose from Bulls attackman JP Revitte, who was looking to make a move toward the goal. Hereford (7-2, 2-1 Division I) secured the ground ball, but it was unable to fire off a shot as a pass from behind the goal sailed to midfield.

“It was a thriller,” said Comets goalkeeper Brian Ruppel, who stopped nine shots to help hold down a dynamic Hereford offense. “We knew it would be a tough one coming in. Hereford, they’ve had a great season. Their Senior Night. There were going to be a lot of high emotions for them.

In what was a first half filled with a lot of defense and a lot of errant shots from both squads, Catonsville entered halftime with a 3-2 lead on the strength of goals by Bolster, Frank Manalansan III (two goals), and Jay Rualo, all of which came in the opening quarter.

Ryan Martino netted the lone goal of the second quarter by either team to trim Catonsville’s 3-1 first-quarter advantage to a goal. Trey Gibbons posted Hereford’s first score of the match with 8:15 left in the opening quarter.

Through a wrap-around goal from Byron Newman (goal, assist) and a power-play goal converted by Eric Kaplan about 3 ½ minutes into the third quarter, the Comets, who reached the 4A state final a year ago, extended its halftime lead to 5-2. The advantage was trimmed back to one by quarter’s end following a power-play goal by Dillon Bakhsh and transition goal by Trey Gibbons, who assisted on the Bakhsh score.

“We’re able to get into a rhythm at times, but you never know what the flow of the game is going to give you,” Hereford coach Kyle Leppert said. “I had some young guys trying to balance patience with chances to push the ball. They’re doing what we ask. I think there are guys who will want to have some moments back, a catch here or a better shot somewhere, but they kept their minds in it. Really, it was a good show.”

Catonsville kept the back-and-forth affair going by posting the first two goals of the fourth quarter for the 7-4 advantage. Kaplan fed an open Manalansan III, who was standing just outside of the crease, with a nifty pass through traffic for the team’s sixth goal while Bolster tossed in the eventual game-winner following a near miss from Rualo with 3:25 remaining.

“Jay (Rualo) had a nice run around the crease and he got nailed,” Bolster said. “He took a shot, and it bounced out. I caught it on top. I ran a couple of steps, and shot it, and scored. I knew if we got one more in, we’d be safe.”

Leading by two, the Comets attempted to salt the game away with passes around the perimeter that eventually led to a pair of penalties on Hereford as the Bulls looked to force a turnover. Despite being a man down, the Bulls secured that Catonsville miscue and quickly turned it into a short-handed goal on a quick transition play from Revitte to Logan Sinsebox to trim the deficit to two late in the contest.

The Comets, who haven’t lost a Baltimore County match since 2019, sit atop the Division I standings with Hereford, Towson and Dulaney each 2-1. The top two teams will play for the Baltimore County title in a couple of weeks.