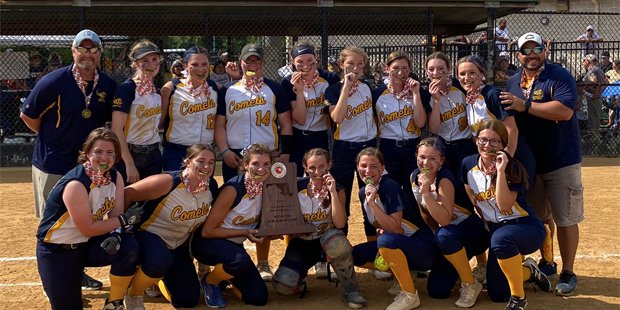 At risk of seeing her outstanding pitching performance spoiled, after back-to-back errors put the potential tying and winning runs in scoring position with one out in the seventh inning, Catonsville High senior ace Sammi Sisolak dug deep to finish off a one-hit gem which carried her team to first state softball title with a 1-0 victory over North County in the Class 4A final Friday afternoon at Bachman Park in Glen Burnie.

Attempting to get the game even, North County put on the squeeze with Brenna Clayton at the plate. The ball was bunted back towards the circle, where Sisolak pounced on it and threw to catcher Devyn Tracy, who applied an excellent tag on a sliding Rebecca Gottleib for the second out of the inning.

With the championship nearly at hand, Sisolak fanned North County’s Joey Sears for a third straight time, to end the game and allow the Comets (14-1 overall) to begin celebrating their first state crown.

“Errors happen,” Sisolak said of the treacherous situation she faced in the final inning. “My teams, which I have always played on, take the hardest road ever. I am kind of used to errors happening behind me, so I bare down, just me and my catcher, throw my pitches and be confident that they are not going to score and everything is going to turn out all right.”

Sisolak, who was hopping on a plane immediately following the game, to join her Maryland Dynasty club team for a tournament in Tennessee, was absolutely brilliant. She retired the first 10 batters she faced and carried a no hitter into the sixth inning before it was broken up by a two-out single by the Knights’ Emma Sullivan.

In her post-game remarks, Sisolak, who will play at Caprini University next year, left little doubt about how she felt about the victory and the game of softball.

Paul Harris, who led the Comets to the crown in his first year as the team’s varsity head coach, emphasized Sisolak’s impact on the team.

“Sammy has been an absolute amazing, amazing addition to this team,” said Harris. “I was very, very fortunate to coach her on JV and coaching her on varsity now, it is just a pleasure to watch her grow as a pitcher. She has not given up one run in the playoffs and has done an awesome job pitching. This is her show. This is what she wanted to do and she came out and did exactly what she wanted to do. I am very proud of her.”

The only run of the game was scored by Catonsville in second inning.

An infield throwing error allowed Abby Mitchell to reach second for the Comets with one out. Following a strikeout, Clayton, who also pitched an outstanding game, fielded a tapper off the bat of Caelyn Voss, but made a low throw to first that alluded Sears, allowing Mitchell to score. North County right-fielder Sam Braun backed up the play and cut down Voss trying to advance to second, but the damage was done.

It was a tough-luck loss for Clayton, who struck out 12 Comets and allowed just two walks and two hits, both by Catonsville shortstop Maggie Kries. Following the second, Clayton retired 10 consecutive batters, including striking out the side in the fifth.

In the sixth, Tracy drew a one-out walk for Catonsville and Kries followed with a single, but Clayton kept her team within one run with back-to-back strikeouts to end the threat.

Harris talked about how special the championship was, especially after the events of the past year with the COVID-19 pandemic.

“This is our first one,” said Harris. “This is huge for us. It’s a big, big win for our program. I am so, so glad we could actually get on the field and do this. We didn’t know at the beginning of the season if we were going to have playoffs. We thought we were just going to play within the county, but when they announced there would be playoffs, these girls were just overjoyed that they could continue to play the game they loved and they showed it in the regionals and states.”

North County coach Kelly Guarnieri spent several minutes comforting her team following the emotional loss that spoiled the Knights’ bid for an undefeated season (16-1) and state championship. She had nothing but pride for their effort and performance.

“These girls played their hearts out all season,” said Guarnieri of her team which allowed just seven runs in 17 games this year and won the always tough Anne Arundel County league. “Our defense has been amazing all year, so it is difficult to lose on a couple of errors, but I could not be prouder of these girls.”