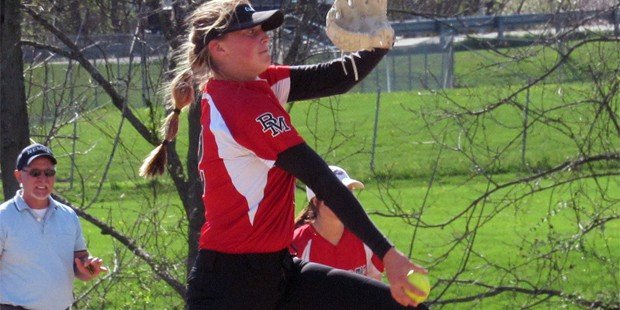 When the C. Milton Wright softball team visited Chesapeake City earlier this month to challenge top-ranked Bo Manor and their sophomore sensation Maddie Penta, an icy wind pushed the wind chill down to nearly 30-degrees and snow flurries dance on the breeze, as Penta threw smoke in a 2-0 no-hit performance.

For Monday’s rematch in Bel Air, the weather was much more pleasant as the temps climbed into the low 70’s. Unfortunately for No. 4 CMW, that was the only thing that changed as Penta was just as nasty, bidding for another no-hitter until the Mustangs’ Lauren Myers rolled ground single up the middle with one out in the seventh. It proved of little consequence as Penta finished off the one-hitter and another 2-0 shutout victory for the Eagles.

After Myers single, which came with one out, Penta hit Brenna Miller to put two on with one down, but last year’s VSN Pitcher of the Year, regrouped to strike out Skylar Little and Emily Rutkowski to end the threat and the game. The only other Mustangs to reach base were Megan Reed and Katie Murphy, who drew a walks, in the fourth and sixth innings, respectively.

Murphy was also the losing pitcher, but she deserved a better fait.

With two out and none on in the top of the third, Bo Manor’s Carlee Ferguson reached with a single and advanced to third when CMW dropped what would have been the final out on an infield pop fly. Ferguson then raced home with the first run a passed ball.

The Eagles got another run in the fourth. Megan Horsey led-off with a single and moved to second on a sac bunt by Penta. Horsey then moved to third on a fielder’s choice and stole home.

Penta needed just 112 pitches to roll through the Mustangs, striking out 12 batters. She also had one of the three hits the Eagles managed against Murphy, who fanned 11.

Bo Manor is now 14-0 this season and 9-0 in the UCBAC’s Chesapeake Division. C. Milton Wright (8-3 overall) fell to 4-3 in the league and the Mustangs are in third place.