No. 18 Fallston outlasts Hereford for 2A state girls basketball championship, first title since 2010; Sharpe and Crawford combine for 26 (VIDEO HERE!)

As a sophomore in her first regional girls basketball championship game, Fallston High center Amanda Sharpe nearly broke out in tears when she had to shoot free throws at a critical moment.

Fast forward two years to Saturday. Sharpe stood on the line with 15.1 seconds left in the Class 2A state championship and the Cougars trailing by two.

This time, there were no thoughts of tears, only confidence.

Sharpe hit both free throws to send the game into overtime and in double overtime, she also hit two free throws to give the 18th-ranked Cougars the lead for good in the 57-56 championship victory over No. 12 Hereford at Xfinity Center at the University of Maryland’s Xfinity Center.

Sharpe, 6-feet, finished with 12 points, 14 rebounds, four blocks and two assists in a game that was tied eight times after halftime.

But she likely will most remember the free throws.

“Oh my gosh. When I got fouled, I was like, ‘This is my worst nightmare, but also that was a dream come true, being the person that sends your team into overtime and the fact that we won states,” said Sharpe. “We do free throws every single day at practice. We have a competition, so doing that, I think, helped a lot because I felt the other crowd booing, but I didn’t let it get to me.”

The championship — in only the third overtime game in girls state tournament history — was the first for the Cougars (23-4 overall) since 2010. 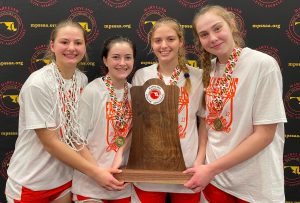 The Cougars had to rally from 11 points down late in the first half and took their first leadon Molly Mullaney’s runner with 4:41 left in the third quarter.

For senior guard Jillian Crawford, who led Fallston with 14 points, this title tops the state championship she won with the soccer team in the fall, because it was so close. Neither team led by more than five through the final 20 minutes.

“This win is definitely something I’m going to remember forever and I’m going to have these friends with me forever,” Crawford said. “I just think this team, together when we celebrate, it’s just going to be amazing and I’m just so happy that we won today.

Against the Baltimore County champion Bulls (19-3), the win came down to the little things, and coach Johnny Woods’  Cougars executed them better down the stretch.

“We found our rhythm a little bit in the second half,” Woods said, “and in overtime, I think it was just a gut check. I’m sure they were just as tired as my starters. They played their starters the whole game. My starters got a little bit of a break, but for those last six minutes, it was like, who wants it more, but we talked about free throws a long time ago and free throws made the difference.”

After Sharpe’s free throws pushed the game to overtime at 47-47, the teams scored all their points on 3-pointers in the first extra period. Fallston’s Allie Book and Hereford’s Lauren Orner twice traded 20-footers to a 53-53 stalemate.

In the second overtime, neither team hit a field goal. All the scoring came down to free throws and Fallston hit one more. Mullaney’s free throw with 1:35 to go held up as the game winner, giving the Cougars a 57-54 lead.

Lauren Kraft, who led the Bulls with 27 points, hit two free throws to pull within 57-56 with 56 seconds left. Fallston didn’t take another shot after that and the Cougars turned the ball over twice. The Bulls had two good looks at the basket, including a short jumper with 3.3 seconds left, but could not get either to fall.

“We did the little things all year long that got us here,” Hereford coach Dave Schreiner said, “and I think in the end, it was some little things that didn’t keep us out there. In the first overtime, we had a couple opportunities, missed some shots we needed to make and some foul shots and in the second overtime, it was kind of the same thing, so it was the little things. Sometimes the ball just bounces the wrong way, but I give a lot of credit to Fallston. They played a great game.”

Schreiner said he hadn’t expected Book to be Fallston’s key 3-point shooter in overtime and Book probably didn’t either.

“All my life I’ve been a little timid to shoot from the outside corner,” said the senior guard. “I always have my biggest supporter, Johnny Woods, who will yell at me and tell me to shoot. Low and behold, they go in. He must know something that I don’t.”

Book, Crawford and Mullaney combined for nine of Fallston’s 10 3-pointers and 33 points.

For the Bulls, who had hoped to win the program’s first state title, the loss was emotional, because they had so many chances and because of the chemistry they developed over the season.

Schreiner said it was one of the greatest coaching experiences of his 36-year career.

“I’m just super proud of my teammates who put in the work every single day at practice and coach Schreiner who spent countless hours at home watching film and with us on the court. Everyone gave it their all,” said Lauren Orner, who finished with 15 points. “We didn’t get the outcome but we’re super proud of everyone.”