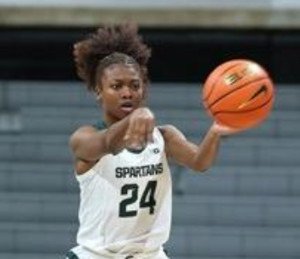 Former St. Frances girls basketball star Nia Clouden is one of just 12 players who have been invited to attend the 2022 WNBA Draft, which will take place on Monday, April 11th in New York.

WNBA Commissioner Cathy Engelbert will announce the first round selections live on ESPN and the ESPN App beginning at 7:00 p.m. This is the first time the event will be in-person since 2019.

Clouden, a 4-time All-Big Ten selection at Michigan State, capped off her senior season by being named an honorable mention WBCA All-American by the Associated Press. She finished her career second in career scoring for the Spartans with 1,882 points. Last season she averaged 20 points, 4.2 rebounds and 4.2 assists per game. She also set a single-game school record when she scored 50 points in a game against Florida Gulf Coast. She was also a semifinalist for the Nancy Lieberman Award, given to the nation’s best Division I point guard.

Some mock drafts have her going as high as No. 6 overall to the Indiana Fever. The Fever currently have four of the 12 first round picks.