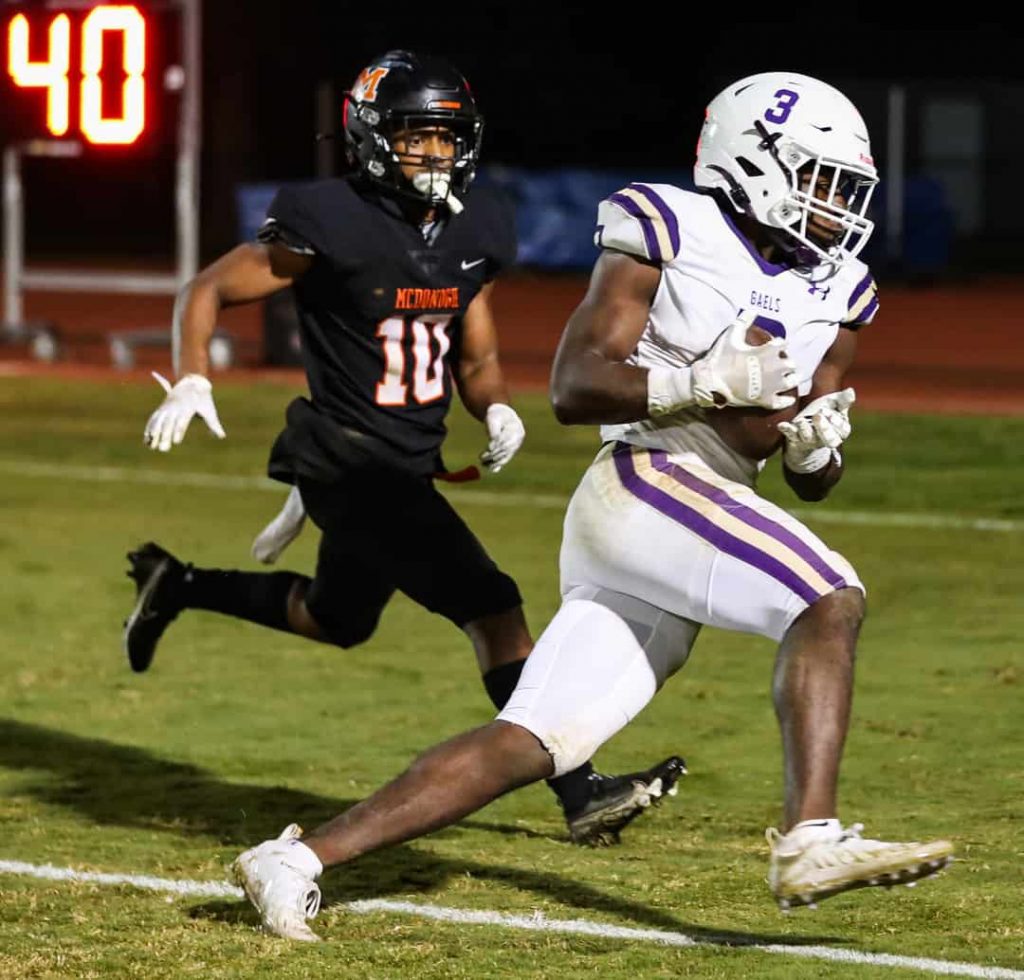 Mount St. Joseph’s Bryce Cox (3) heads into the end zone for a touchdown ahead of McDonogh’s Demitrius Smith during the fourth quarter of Friday’s MIAA A Conference football contest. The fourth-ranked Gaels rallied in the second half for a 14-11 victory over the No. 5 Eagles in Owings Mills. (photo – Sports Majors)

This time, however, the fourth-ranked Gaels were able to overcome. Barely. Mount St. Joseph defeated the No. 5 Eagles, 14-11, in a MIAA A Conference contest at John W. McDonogh Stadium in Owings Mills.

Sophomore quarterback Winston Watkins was 12-of-21 for 135 yards and two touchdowns for the Gaels (4-2 overall). Ronald Goodridge had five receptions for 60 yards and a touchdown.

The Irvington school capitalized off two second half McDonogh miscues and made timely defensive plays down the stretch to improve to 2-0 in league play, tied with No. 2 and undefeated Archbishop Spalding. The win eased the sting of last week’s 29-21 home loss to Washington Catholic Athletic Conference stronghold Our Lady of Good Counsel, which rallied from a 21-0 first half deficit.

“This week, the kids were able to finish so we’re really proud of them,” Mount St. Joseph coach Dom Damico said.

The reigning MIAA A champ Gaels, who went scoreless the final three quarters last weekend, trailed 3-0 at halftime Friday, before breaking through late in third.

Watson’s 4-yard lob to Bryce Cox extended the Gaels’ advantage to 14-3 with 6:17 left in regulation. The drive was set up by another mishandled punt snap by the Eagles.

Howard ran the ball in for the 2-point conversion, pulling the Eagles to 14-11 with 5:26 to play. The Eagles got the ball back around the 2-minute mark after Mount St. Joseph weren’t able to convert on 4th down.

The Gaels’ defense, which gave up 29 second half points last weekend, closed ranks Friday. Spencer Toth and Connor Roman each came up with critical sacks.

“Our defense played amazing…we did a great job of staying in the game mentally,” Watson said. “This week, we were all mad at the Good Counsel loss and we wanted to beat McDonogh so bad…it was great as a team to get this win.”

Howard, who’s committed to the University of Maryland, had six catches for 124 yards and the touchdown catch for McDonogh (1-4), which led 3-0 on Sam Asplen’s 41-yard field goal midway in the second quarter.

The second half punting miscues hurt the Eagles, who sit 0-2 in league play after being regarded as a MIAA A championship contender in the preseason.

Despite the loss, McDonogh coach Hakeem Sule was pleased with his team’s effort Friday.

“The two bad snaps were costly in this game, but I’m proud of my guys. They played really hard for the most part,” McDonogh coach Hakeem Sule said. “I thought that was the best full game of football we played. There’s some things we got to clean up but, for the most part, I was proud of their effort.”

Friday marked the return of Damico to McDonogh as an opposing head coach after winning eight MIAA championships in a 24-year run at the Owings Mills school. Damico was defensive coordinator at Franklin in 2019 when the Indians lost to McDonogh.

Damico, who credited Stephen Schulze, Toth and Deshaun Merrick for playing both sides of line Friday, hopes the win springs Mount St. Joseph through the remainder of the regular season.

“McDonogh’s a powerhouse,” Damico said. “We feel like we’re making progress. We feel like if we stay healthy we have a chance to compete for the [MIAA] A Conference championship.”