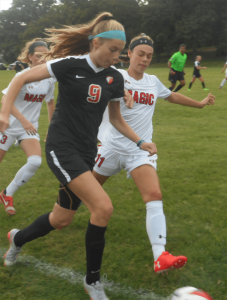 Things have not gone well for Mercy over the last six season against McDonogh in Interscholastic Athletic Association of Maryland A Conference soccer matches.

During that span, the Eagles have swept all 10 matches against the Magic by a combined 55-3 score while claiming four conference crowns.

That’s why Tuesday’s showdown in Northeast Baltimore was so crucial for the collective bruised psyche of the Mercy program.

And while the fifth-ranked Magic fell to No. 2 McDonogh again, this year’s 3-2 setback showed that the two sides have come much closer together than have been in a long time.

In fact, there was a span of about 10 minutes in the second half of the conference opener for both schools when the Eagles, who were leading, 3-1, were pushed back on their heels while Mercy cut the deficit to a single goal and then created several serious chances to net the equalizer.

“This is a good Mercy group,” McDonogh coach Harry Canellakis said. “They have a very dynamic forward up front, which we had a lot of problems dealing with. We’re lucky to get out of here with three points.”

Unsurprisingly, junior Ada Clare Tempert, the forward alluded to by Canellakis, played a major role in both Mercy goals and on the bid to tie the score as well.

“I think she’s the best player in the state,” Mercy coach Doug Pryor said about his leading scorer who has seven goals and four assists in five matches this year for the Magic (3-1-1).

That said, the Eagles (3-1-1) have plenty of star power of their own to rely on in clutch situations, including senior defender Maddie Jenner and junior midfielder Julia Dorsey.

Both had key moments in the victory, as did freshman Kemper Robinson, sophomores Kalli Wethern and Lilly McCarthy and junior Dani Peay.

All of them figured in the scoring for McDonogh, with Wethern converting a feed from Robinson to give the Eagles a 1-0 advantage in the 32nd minute and McCarthy nudging in a long Jenner throw-in early in the second half for a 2-0 bulge.

Six minutes later, Tempert halved the deficit on a 12-yard rocket that she powered through the hands of junior keeper Abby Van Metre.

Tempert willed her way to winning a 50-50 ball from an Eagle defender before unleashing the shot.

Applying even more pressure, the Magic broke through again when Tempert found Kasco streaking toward the goal and the former Seton Keough performer put away the perfect cross to reduce the deficit to 3-2 with just under 18 minutes remaining in regulation.

The Magic continued to probe for the tying tally for the next three minutes, but were turned away when McDonogh freshman Alayna Lynchard cleared a ball heading toward the net prior to Van Metre pushing Tempert’s dart to the corner aside.

After that, the Eagles did a great job of controlling possession of the ball in their offensive end of the field to preserve the victory.

“That’s good soccer — good management of the game,” Canellakis said. “You have to take it to the corner sometimes, but, more subtly, you play the ball to the corner, because Mercy is such a good counter-attacking team. You play balls they can’t counter against.”

Tempert was not one to call a close loss to the defensing champions a moral victory.

“We work well together, but when it comes to big games everyone psyches themselves out,” she said. “We’re all physically fit, and we know what we’re doing, but it’s all mental. We have to build each other up, not tear each other down, and work together.”