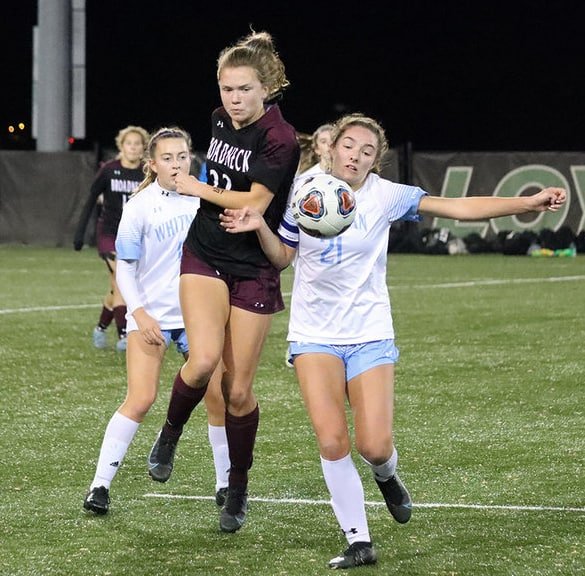 Walt Whitman had other ideas. The Montgomery County school put the No. 2 Bruins on their heels before weathering a late push for a 2-1 victory to win the Class 4A state championship.

“Tonight was a good indicator of what the team’s made of,” Broadneck coach John Cam said. “When things didn’t go our way tonight, we hung in there, still fought.”

The Anne Arundel County school which had not allowed a goal in more than a month, was in a 1-0 hole seven minutes into the match Saturday. Whitman (15-2-1 overall) made it 2-0 with a goal from freshman Evelyn Javers in the 55th minute.

The Bruins (17-1-1), who won the 2017 4A title, didn’t quit. Junior forward Sadie Wilkinson delivered a kick that curled past Whitman goalie Sophia Mays for the Bruins’ first score in the 77th minute.

“We kind of had that attitude that we were still in this game, as long as there is a goal difference, we are still in the game,” said Camm. “(We) have that fighting mentality. These kids have embraced it.”

The Cape St. Claire school wasn’t able to make up the deficit, ending a 23-game unbeaten streak dating back to the abbreviated fall season that took place in late winter because of the COVID-19 pandemic.

“From the start, even in the spring season last year, our goal was to get to states and play here at Loyola,” said Mowery. “I thlnk we just kept that same mentality through the whole season.”