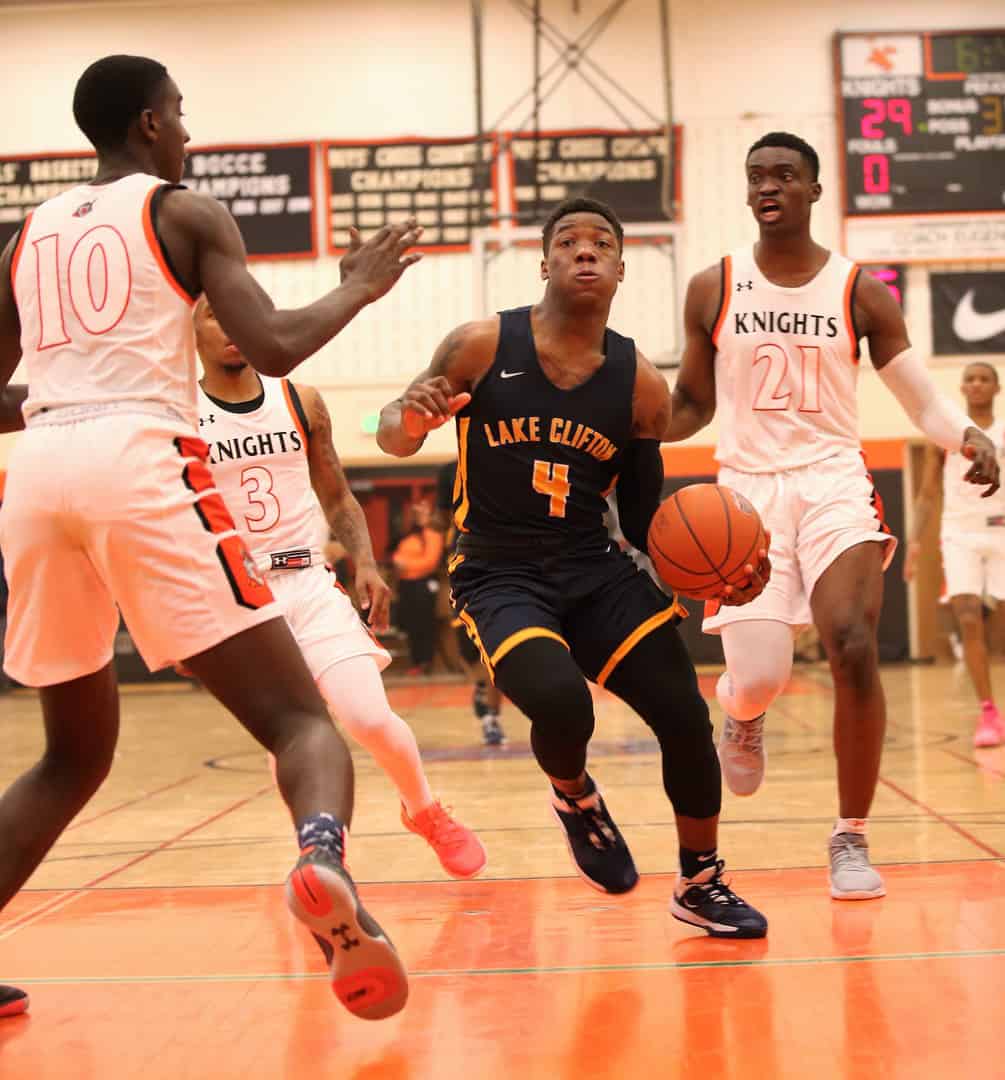 Kelvin Spruill has “found his rhythm,” and Lake Clifton is on the verge of the Baltimore City boys basketball title game.

The St. Lo Drive school went on a 15-4 fourth quarter run, handing the Knights’ their first loss and gaining sole possession of first in divisional (6-0) play. The Lakers can clinch a spot in the Feb. 25 city title game with a victory over seventh-ranked Edmondson Friday.

Lake Clifton is on the cusp of a trip to Morgan State University’s Hill Field House, thanks to tough back-to-back road victories. The Lakers defeated No. 8 Mervo last Thursday after falling behind a 17-1 in the opening quarter.

“This time of the year, it’s a battle,” said Lakers longtime coach Herman Harried. “Teams are in their groove…it’s about who can weather the storm and who can out-battle who. Today was a heavyweight boxing match.”

“Everything we do in practice, we just do it on the court,” said Spruill.

Spruill, a senior transfer from Catonsville, has emerged the last couple of games for Lake Clifton. He had 14 points and six rebounds Tuesday, grabbing a loose ball and slamming it home, giving the Lakers a 45-44 lead with two minutes, six seconds left in regulation.

Harried said the Lakers have been waiting for the 6-foot-7 Spruill to “play his height.”

“Guys have always believed in him and have gotten on him,” said Harried. “He and I had a long talk before the Mervo game and must’ve hit a button.”

Spruill, who had 10 points and eight rebounds in Thursday’s 56-43 victory at Mervo, picked up a loose ball and went to the basket. He used his body as a shield and put in an off-balanced left-handed shot off high off of the glass to fall, putting the Lakers up 43-42, with 3:51 left in regulation.

City regained the lead on two Ahmad Harrison’s free throws. Spruill missed a three-pointer, but teammate Jalen Morris swiped away Karrell Booker on the other end.

Blackwell got the loose ball and drove to the basket, but City’s Clarence Obiajulu came from behind to block the ball. The ball landed the floor where a trailing Spruill grabbed it and dunk it, sending his bench into a frenzy.

“I knew he can play big games,” said Lakers junior guard Zac Blackwell. “I told him he’s going to find his groove.”

Lake Clifton got the ball on the alternate jump ball with 12.3 seconds remaining. Blackwell converted two free throws with 5.7 seconds.

The Lakers got off to a much better start, compared to Thursday’s 17-1 hole against Mervo. They built a 20-12 advantage early in the second quarter after a Gray floater completed a 11-0 run.

The Knights got a better handle in the paint and Ahmad Harrison went for 11 points in the second quarter, putting the hosts up 29-26 at halftime. City gained its largest advantage, 35-28, with 5:36 left in the third after back-to-back three-pointers from Dominick Carrington.

The Lakers, especially Spruill, who scored seven points,  had the answers in the fourth.

“I had to show out and play big,” said Spruill. “I’m just finding my rhythm each game.”

Harrison led all scorers with 20 points and Carrington finished with 12 for City (16-1, 5-1 A Division), which missed an opportunity to secure a spot in the city title game. The Knights went the final 6:25 without a field goal.

Perfect timing: Kelvin Spruill has provided a huge boost for Lake Clifton. The 6-foot-7 senior scored seven of 14 points in the fourth quarter Tuesday as the Lakers are a win away from the Baltimore City title game at Morgan State University next month. (photo – Jimmy Fields Sr.)

“We kind of self destructed. I preached to the guys coming out to the fourth it was going to be about who wanted it more,” said City coach Omarr Smith. “I knew Lake wasn’t going to go away. I had a feeling the game was going to be physical…we’ve had every type of game this year. At the end of day, it’s about sticking together and fighting.”

Which is what Lake Clifton has done the last two games. Now, the Lakers control their destiny.

“Thursday was a storm. Today was a storm and Friday will be a hurricane,” said Harried, whose team last reached the city title game in 2015. “It’s no breathing room.”