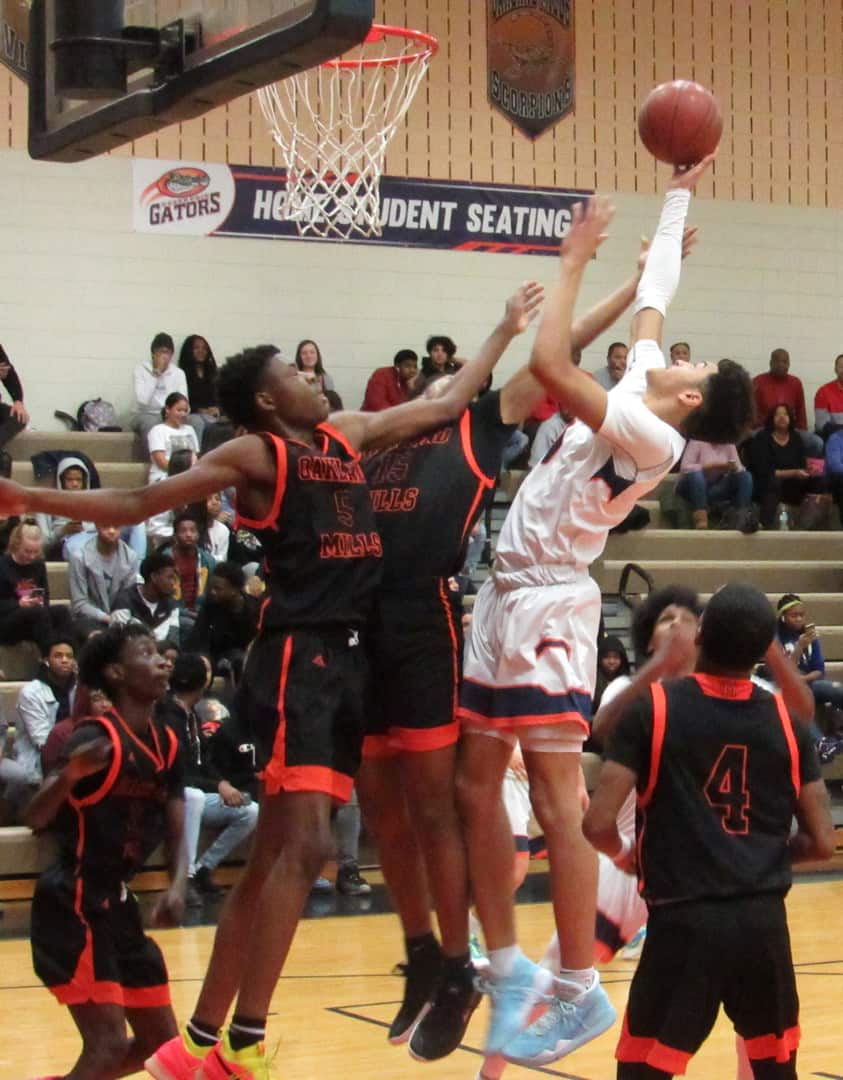 Reservoir’s Bobby Hill tries to corral a rebound ahead of Oakland Mills’ Barry Evans (5) and Stevie Jackson during Friday evening’s Howard County boys basketball contest. Hill posted a double-double of 19 points and 14 rebounds as Reservoir won its 10th straight game with a 66-58 victory in Fulton.

Thanks to an early boost from their bench, the Gators grabbed command in the third quarter, avenging a 12-point loss to the Scorpions last month in Columbia. Thanks Atholton’s victory over Centennial Friday, Reservoir has sole possession of first (10-2) in the HoCo standings.
“It’s a huge in-county win…we’re in first place,” said Gators’ first-year coach Ian Pope. “The team played really really well. Our bench really did a really good job.”
Juniors Jason Ha and Jalen Jerry and freshman Drew McKenna combined for 15 points in the opening half, helping turn an early 8-2 deficit into a 33-24 lead at intermission. Ha hit two 3-pointers in the first quarter and McKenna scored six in the second.
“Jason and Jerry coming off of the bench hitting big shots and Jalen hustling and getting boards has been huge,” said Hill.
Hill, a 6-foot-6 DeMatha Catholic transfer, and his starting mates did the rest, opening up a 19-point advantage in the second half. Reservoir, which week started with an upset victory at No. 11 Gilman School Monday, has won 10 straight decisions.
Pope said the Gators are “playing for each other.”
“You can’t quantify that in terms of points, but when you watch us on film, you can tell we’re a close-knit group,” said Pope.
“No matter goes on, we’re all on the same page when we’re on the court,” said Glasper.
It didn’t start that way Friday for the Gators, who got the bench boost to close the opening period on a 12-2 run to gain the lead for good. Hill and McKenna combined for 12 points in the second as Reservoir advanced the lead to 33-24.
The Gators distanced Oakland Mills in the third as Glasper dropped a 3-pointer and converted a transition layup for a 43-26 advantage. Jaylen Manning scored on a drive for a 51-32 lead after three periods.
Oakland Mills (14-5, 9-4 Howard) got to within 61-53 in the final minute. Barry Evans added 15 points for the Scorpions, and Ke’mar Simpson finished with 11.
Oakland Mills coach Jon Browne was disappointed with his team’s effort.
“Tonight was our worst game of the year. We didn’t handle adversity well,” said Browne. “We got a little behind but nine points isn’t insurmountable. We were feeling sorry for ourselves for most of the game. They didn’t want no parts of this game.”

Reservoir, which reached the Class 3A state final last season, controls its destiny in Howard County. The Gators have road games next week at Howard and second-place Marriotts Ridge (9-3 Howard).