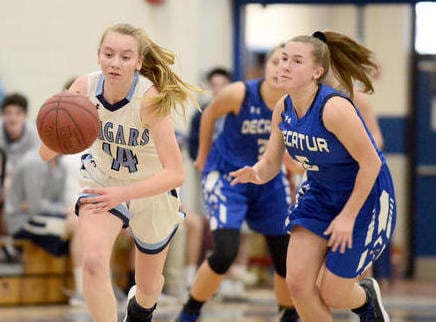 by Derek Toney
The start of 2019 brings new entrants in VSN’s Girls Basketball Top 20 with Chesapeake-Anne Arundel and Archbishop Spalding.
The Cougars (co-No. 20), who won just one game five seasons ago, have become one of the best in Anne Arundel County, reaching the Class 3A state final last season. The Pasadena school won the Tracey Carrington bracket at the All About the Girls Holiday Hoops Invitational at Henry A. Wise last week.
Archbishop Spalding, which dominated the IAAM A Conference in the first half of the decade, has its first VSN Top 20 spot (co-No. 20) in nearly five seasons. The Cavaliers won the Annapolis Area Christian School Christmas Tournament title last week.
Coppin Academy (No. 19) is back in the poll after making the Donnis Thompson bracket final at the Title IX Classic at the D.C. Armory. The Eagles were 16th in the preseason poll.
Despite having its 22-game winning streak snapped at the John Wall Holiday Invitational final in North Carolina, St. Frances Academy remains No. 1. Roland Park, which fell to USA Today No. 1 Bishop McNamara in the Pat Summitt final at the Title IX Classic, stays No. 2 in the VSN area rankings.
McDonogh School, Poly and St. Vincent Pallotti completes the Top 5. The second five includes Pikesville, John Carroll School, Howard, St. John’s Catholic Prep and Mount de Sales Academy.
Pictured above: Junior guard Ashley Chew (with ball) has helped Chesapeake-Anne Arundel to a solid start this season. The Cougars share the No. 20 spot in this week’s VSN’s Girls Basketball Top 20.
Here is the entire VSN Girls’ Basketball Top 20 for week 4:

Last week: The Panthers finished 6th in the Patsy Mink bracket at the Title IX Classic at the D.C. Armory, losing to Ohio’s Perry, 66-41, following a 57-45 loss to Virginia’s T.C. Williams (consolation) and 54-53 victory over North Point (first round).

Last week: The Patriots placed 6th in the Silver bracket at the Boo Williams Classic in Hampton, Va., losing to Virginia’s Stonewall Jackson, 60-50, after a 48-42 victory over Virginia’s Colonial Forge (consolation) and 42-40 loss to Virginia’s Menchville (first round).

This week: vs. Marriotts Ridge, Jan. 4

This week: at Douglass, Jan. 4

Last week: The Seahawks lost to No. 8 Howard, 59-53, in the final of the Howard Holiday Hoops Tournament after a 67-40 victory Hammond in the first round.

Last week: The Patriots won the Joe Rosedale bracket at the All About the Girls Holiday Hoops Invitational at Henry A. Wise, defeating Wise (64-49; final) and Westlake (68-27; first round).

Last week: The Gators finished 3rd in the Joe Rosedale bracket at the All About the Girls Holiday Hoops Invitational at Henry A. Wise, defeating Westlake, 63-39, after a 57-51 loss to Wise in the opening round.

This week: at Severn School, Jan. 4

Last week: The Knights lost to Walt Whitman, 49-40, after a 76-42 victory over New York’s Abraham Lincoln in the DMV Elite Showcase at the Governor’s Challenge in Salisbury.

Last week: The Gators did not play.

Last week: The Lightning did not play.

Last week: The Eagles lost to St. James School in the Donnis Thompson bracket final at the Title IX Classic at the D.C. Armory after victories over Franklin (55-49; semifinal) and Maret School (D.C), 55-50 (first round).

This week: vs. Digital Harbor at Coppin State, Jan. 3

Last week: The Cougars won the Carrington bracket title at the All About the Girls Holiday Hoops Invitational at Henry A. Wise, defeating Atholton (54-31; final) and Dunbar (55-42; first round).