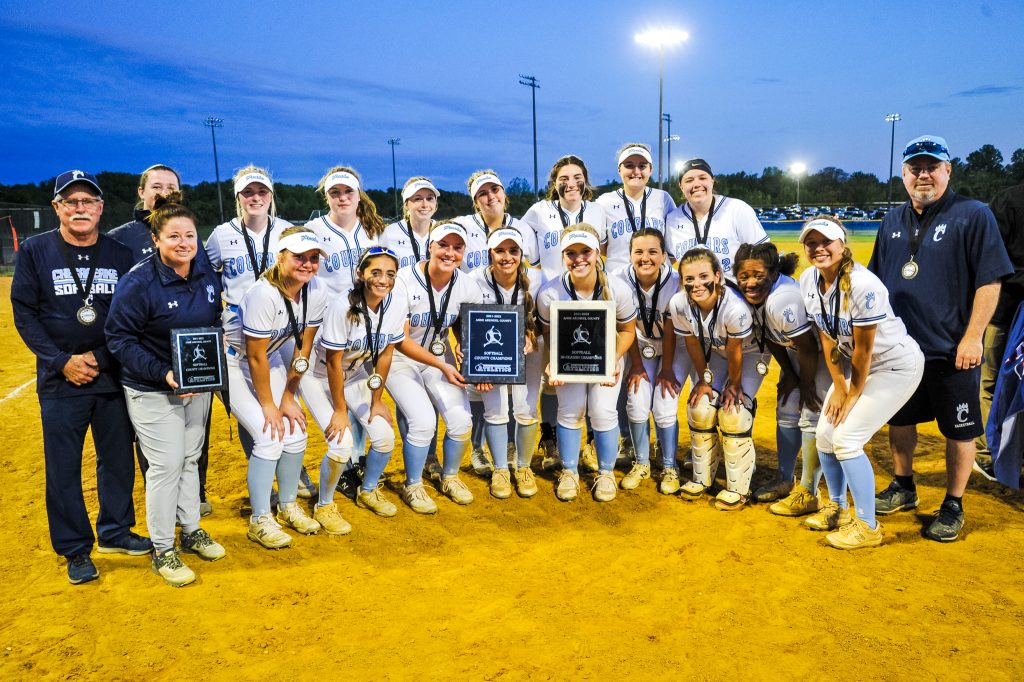 It wasn’t long before experience won out. 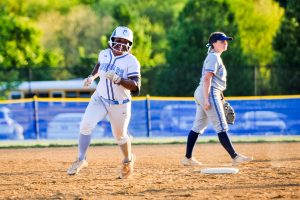 Chesapeake-AA’s Alana Watts rounds second base after her home run in the second inning of Tuesday’s Anne Arundel County softball title game against South River. The sophomore leadoff hitter had four hits as the Cougars won 6-0 at Bachman Park in Glen Burnie.

The fourth-ranked Cougars blanketed Bachman Park with spirited energy and softball prowess, carving through the No. 9 Seahawks for a 6-0 win.

A complete-game shutout by senior pitcher Kendall Thomas paced the Cougars, who received a four-hit day from sophomore Alana Watts, complementary offense from throughout the lineup and timely defensive plays to improve to 17-1 overall, pairing their regular season county crown with a title-game plaque.

Chesapeake first-year coach Brittany Owen said it was a total team effort made easier by the big-game experience of the reigning Class 3A state champions.

“It was a team effort. It really was a team effort. They were all in it together,” said Owen. “It also helps that we do have a little experience coming here, so they had an idea of what is going to happen, the different atmosphere, all the people here. So, we were zoned in.”

Thomas set the tone by retiring the Seahawks in order in the top of the first, and her offense rewarded her by immediately pouncing on South River pitcher Brianna Ford.

After Thomas struck out two in a clean second inning, Watts came to bat with two out in the second and lifted an 0-1 pitch high and deep over the center-field fence for a 4-0 Chesapeake lead.

Watts, recently returned from injury, didn’t play when Chesapeake defeated South River, 11-6, earlier this season, but she made her presence felt on Tuesday with the home run, four hits and three runs scored.

“My mindset was just, ‘Get on base,”’ Watts said. “Either way. I can try to get a hit somewhere, but just getting on base is all that matters. …[On the home run swing] I was like, that’s really high! Then I was like, yaaayyy! All sorts of emotions, mostly happiness, though.”

With a 4-0 lead, Thomas stayed in rhythm. The senior struck out six Seahawks and needed 78 pitches on the day, keeping South River (14-4) guessing by rolling out a deliberate gameplan with senior catcher Devan Wenger.

“I used all my pitches today,” said Thomas. “I was hitting all my locations pretty well, in my opinion. Last night, my catcher and I did some homework. We watched the whole South River game from a couple weeks ago to figure out what pitches we should throw, and it was actually my dad’s idea to do it, and it worked out. It keeps them off-balanced. They don’t know what’s coming. It could be outside, inside, screwball spin, my two-seam spin that goes out, change-up that slows it down. They don’t know what’s coming sometimes.”

Even when Thomas allowed runners – she allowed only three hits on the day, two to South River’s Sara Blades and one to CJ Harris – Chesapeake came through with defense. Pollack, Hart, and Bianco all made skilled putouts in the infield; Larkin got dirty to snare a soft pop up off first base; and right fielder Alli Kunes leaped and extended to catch a hard line drive.

But the six-run lead was all the support Chesapeake needed to close out the win and take the championship hardware back to Pasadena.

Pollack said the team has everything in place to keep its joyous season churning. 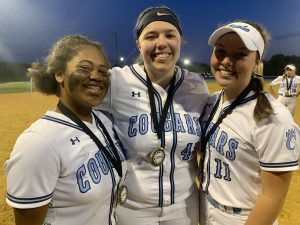 “Everyone has different [offensive] strengths,” said Pollack. “We have slappers, we have power hitters, we have gap hitters, and people who can lay down really good bunts, so I think that’s really important in a lineup overall. Coach B does a great job setting us up perfectly for success. …We’ve rolled multiple double plays this year, our outfield is amazing, and we’re just solid all around. We have great pitching, great catchers, a great infield, and just a great overall team. …We are trying to go one game at a time, but obviously the end goal will be to win a state championship and repeat.”

South River coach Tim Williams acknowledged the experience disparity with the Cougars. Nonetheless, the Edgewater school has taken the county by storm this season.

“I think we were definitely a little anxious there at the beginning of the game,” said Williams. “Once we kind of calmed down our nerves, defensively and pitching-wise we did a good job of trying to contain them, and they’ve got a great lineup.

…When I first started at South River like 15 years ago our program was the complete opposite. Overall our season record is probably the best this school has ever seen. I’m not sure the school has ever made it to the county championship before, so really just being here and having the program head in that direction is something that I would hope they would be proud of.”