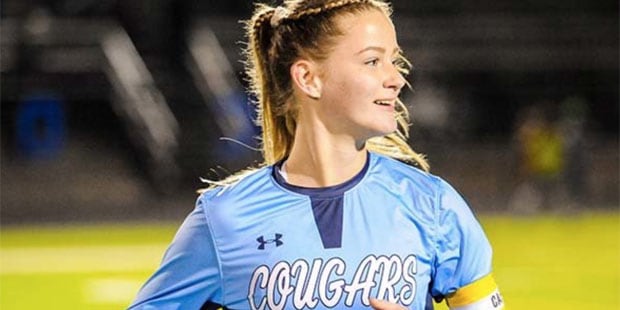 Cougars are in at No. 8 after advancing to the 3A State Semifinals; Wilde Lake and Rising Sun advance; Maryvale enters after IAAM B title win

Previously unranked Chesapeake-AA, which has advanced to the 3A state semifinals, has made a rare late season charge from unranked all the way into the Top 10, as the Cougars land at No. 8 this week.

Chesapeake, which sports an 11-3-2 record, has made its move by going 4-0 thus far in the state tournament, including a 1-0 win over Rockville in the state quarterfinals. The Cougars will play Wilde Lake on Saturday at Linganore High School. The Wildecats has also made a big jump in this week’s poll, going from No. 16 to No. 6.

Another team which made a big move was Rising Sun, which climbed from No. 20 to No. 14 as the Tigers have advanced to the 1A State Semifinals. In addition, Maryvale Prep, which topped previously 14th ranked Mount de Sales in the IAAM B title game on penalty kicks, entered the poll, sharing the 20th spot with the Sailors.

In the Top 5, the IAAM A Conference playoffs are complete and with yet another league title McDonogh remains at No. 1, a position it will hold at year’s end. Despite falling to the Eagles in the final, Archbishop Spalding remains at No. 2, and Mercy, which was defeated by Spalding in the semifinals, remains at No. 3.

Rounding out the Top 5 are No. 4 Century, which remained undefeated and moved up one spot from No. 5, and No. Severna Park, which jumped two spots.

This week: vs. Calvert, at Montgomery Blair, 2A State Semifinals, Nov. 9

This week: vs. Winston Churchill, 4A State Semifinals, at Gaithersburg, Nov. 9

This week: vs. Chesapeake-AA, 3A State Semifinals, at Linganore, Nov. 9

Last week: lost to Hereford, 3-0, 3A North Region I Finals

This week: Season Complete, 3A North Region I Finalists

This week: vs. Middletown, 2A State Semifinals, at Montgomery Blair, Nov. 9

This week: Season Complete, 2A West Region I Finalists

Last week: def. Old Mill, 1-0, 4A East Region I Final; lost to then No. 7 Severna Park, 4A State Quarterfinals

This week: Season Complete, 3A East Region I Finalists

This week: Season Complete, 2A East Region I Finalists