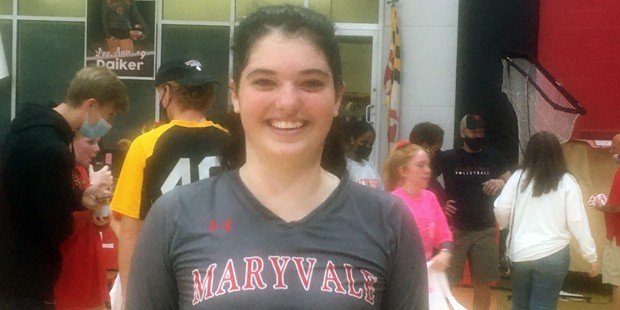 As each set unfolded in Tuesday’s volleyball match between unbeaten Maryvale Prep and IAAM A Conference contender Archbishop Spalding, there were moments of hope for the visiting Cavaliers to be the first team to snatch a set from the Lions this season.

That never happened because each time 11th-ranked Spalding dared to either take the lead or be pesky enough to stay within a couple of points late in a set, No. 1 Maryvale found a way to prevail, 25-13, 25-15, 25-20.

The first set is a case in point.

After the Cavaliers went up, 6-4, on a kill by junior outside hitter Addison Collins, the Lions (9-0, 5-0 league) went on a 9-1 run highlighted by three kills by senior outside hitter Caitlin Shaffrey and two by sophomore middle hitter Samantha Elliott.

Spalding (7-3, 3-1) never quite recovered from that onslaught, although the tables started to turn in the middle set when the visitors inched ahead, 10-9, on another Collins kill and were still dead even at 11-all until Maryvale put the pedal to the floor and reeled off 11 of the final 15 points.

Shaffrey and senior middle hitter Chelsea Elliott provided much of the offense during the run, with emphatic Shaffrey’s cross-court kill ending the suspense and putting the Lions ahead, 2-0.

The final set was the most competitive of the three, with the Cavaliers inching in front, 12-11, on a kill by junior defensive/specialist/libero Sophia Vance.

The Lions, runners-up to Mount de Sales Academy in the 2019 championship, reacted quickly to the rally with a 8-1 spree with Elliott’s block snapping the final deadlock and a couple of Shaffrey aces to help the cause.

Spalding hung tough, though, and staged a pretty good comeback of its own to pull within 22-20 on junior right side hitter Katherine Este’s ace before Maryvale responded with a kill by Samantha Elliott on a nice assist by sophomore setter Kaitlin Hall.

Superior play at the net by Samantha Elliott and freshman Emily Kuczynski closed out the Cavaliers and kept the Lions’ perfect-set streak intact.

“We had to try to find a way to grind through, and we couldn’t,” Spalding coach Corby Lawrence said. “We just needed to be a little bit better — a little faster — to read their setter. I think we were a little shell-shocked at first.”

Shaffrey was all over the stat sheet for the Lions, totaling 10 kills, eight digs and seven aces.

The Gettysburg College commit praised Hall (match-high 25 assists) for her play and said that winning every set this season is a meaningful goal for the Lions.

“We know it’s possible and that we have the ability,” she said.

“She continues to grow and the girls are getting more comfortable with her hands,” she said. “She’s stepped in and done an amazing job.”

“She’s a firecracker,” the coach said. “She goes all out, all the time.”

Spalding will host Mount de Sales on Wednesday while the Lions will host the Sailors on Friday.

Pictured above: Maryvale Prep outside hitter Caitlin Shaffrey, who had 10 kills, 8 digs and 7 aces in the top-ranked Lions’ 25-13, 25-15, 25-20 over No. 11 Archbishop Spalding on Tuesday evening to remain unbeaten this season.