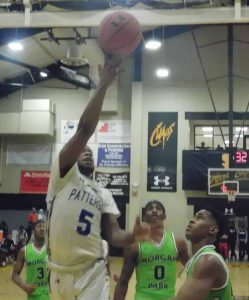 Patterson’s Gerard Mungo goes in for a layup over Morgan Park’s Adam Miller during the opening game of the Charm City vs. Windy City boys basketball event at St. Frances Academy. Mungo finished with 30 points, but the fourth-ranked Clippers fell in overtime to the Chicago powerhouse.

It was deja vu all over again for St. Frances Academy and Patterson boys basketball squads Saturday at the Charm City vs. Windy City Showcase for different reasons.

The fourth-ranked Clippers dropped an 88-77 overtime decision to Chicago’s Morgan Park, while No. 2 St. Frances posted an 80-75 victory over Simeon, in the nightcap inside Phelps Gym in East Baltimore.

Saturday, the Kane Street school failed to hold a 7-point advantage in the final 3 minutes, 50 seconds of regulation.

“I told them they [Morgan Park] are the type of team that goes back and forth and I think we just quit,” said Patterson coach Harry Martin. “We just stopped playing our type of basketball and they made a run and we didn’t respond well.”

With Patterson trailing, 56-55, entering the fourth, Mungo started an 10-2 run with a steal and basket and added a nifty reverse layup. After missing a ferocious one-handed dunk, Price got a pass from Jalen Willis and converted off the glass, giving Pattterson 65-58 lead with 3:50 left in regulation.

Morgan Park regained the lead, 69-67, as Miller hit a short jumper with a minute left in regulation. Willis got Patterson even with a basket with 53 seconds left, and had a chance at the end of regulation, but a jumper by Mungo appeared to come right after the buzzer sound.

Mungo missed on the final attempt, then Morgan Park took over in overtime. The two-time reigning Illinois Class 3A state champs, ranked 4th in the Chicago metro area by the Chicago Sun-Times, scored the first five points and out-worked Patterson on the offensive boards.

“Too many guys watching the ball and not putting a body on a body,” said Martin, whose team plays No. 8 Lake Clifton in a potential Baltimore City title game preview Tuesday. “It’s about effort. Our effort wasn’t there.”

St. Frances continued its success in the Baltimore/Chicago competition, but needed a late push to thwart a Simeon comeback. Junior guard Adrian Baldwin finished with 25 points for the Panthers (20-3), and Jordan Toles added 18.

The defending Baltimore Catholic League champs led 58-44 late in the third quarter, but Simeon (10-11) rallied, tying the game at 63 with 2:26 left in regulation.

As been the case the last three seasons, St. Frances turned to Baldwin, arguably the area’s top point guard. After forcing a five-second call on defense, Baldwin converted a 3-point play, giving the Panthers the lead back.

The 5-foot-10 junior added four free throws, going 7-of-7 in the final frame and 10-of-10 for the match. Last year, Baldwin had 14 points and seven assists in St. Frances’ victory over Morgan Park at Poly.

In 2017, Baldwin capped a fourth quarter rally with a follow-up at the buzzer to beat Morgan Park. Afterwards, the then-freshman was lifted up by his teammates.

“It was a great environment, everybody in Baltimore comes out,” said Baldwin, who was last year’s Baltimore Catholic League Tournament’s Most Valuable Player. “Playing on our home court is another big thing.”

“When I took over six years ago, the goal was to get us to a national level and the guys look forward to playing in these national events,” said St. Frances coach Nick Myles. “It’s a testament of what we’ve been able to do, but this time of year it’s about championships and we’re focusing on the MIAA A and BCL.” 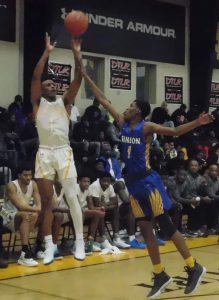 St. Frances’ Adrian Baldwin attempts a shot as Simeon’s Jaylen Drane defends. Baldwin scored nine of his 25 points in the fourth quarter as the No. 2 Panthers won, 70-65.

The Panthers have St. Vincent Pallotti in MIAA A action Monday before traveling to Hagerstown for a BCL first-place showdown with St. Maria Goretti Wednesday. Saturday, the Panthers play Poly in the Wells Classic at SECU Arena.