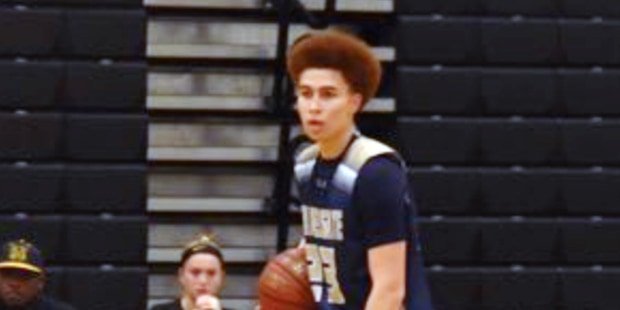 Chapelgate Christian traveled to Frederick on Tuesday and pulled a surprise on St. John’s Catholic Prep, which has been near the top of the MIAA B Conference basketball standings all season. Behind 21 points from Jax Felder, Chapelgate defeated the host Vikings, 68-61.

Chapelgate trailed throughout the first half and St. John’s led 32-26 at the half, but the Jackets came out swarming in the third quarter, shutting down the Vikings with defensive pressure and outscoring their hosts 22-6 to take a 10-point advantage into the fourth quarter.

The loss drops St. John’s (12-10 overall) to 7-2 in the B Conference where they now trail first place Archbishop Curley (8-0) by two games in the loss column in the chase for the top seed.

Chapelgate (12-12 overall) improved to 6-4 in the conference where it sits solidly in fourth place, just percentage points behind third place Friends (5-3).

Pictured above: Jordan Praylow was one of four Chaplegate Christian plays who scored in double figures in its victory over St. John’s Catholic Prep.