It was joy for Mervo and Bluford Drew Jemison, who claimed Baltimore City titles Monday at Dunbar’s Sugar Cain Field. BDJ defeated Northwestern, 4-3, in the D Division final while Mervo ended City College’s title reign with a 10-7 decision in the nightcap.

It was history for BDJ, which won its first title in any varsity sport in its six-year history. The school, formerly IBE (Institute of Business and Entrepreneuership), is housed inside the old Walbrook building in northwest Baltimore.

The Rockets scored twice in the final quarter, avenging an 8-2 loss to Northwestern. Kaku Tutu had two goals and an assist for BDJ (8-5), and senior midfielder Jovannie Gayle scored the game-winner with 4 minutes, 50 seconds left in regulation.

“We were inspired, we were motivated by our coach and defense to work harder,” said Tutu. “We never won a city championship, until now.”

Tutu tied the game with about nine minutes left in regulation. Gayle, a senior midfielder, put the Rockets in front to stay.

Damian Proctor-El scored two goals for Northwestern and Rasheed Sanders finished with a goal and an assist. Dean Jones had a goal for BDJ, which has city league rival Reginald Lewis in the 2A/1A South Region Section II quarterfinals Wednesday.

After its landmark triumph Monday, the Rocket players doused George with water.

“We were inspired, we were motivated by our coach and defense to work harder,” said Tutu. “We never won a city championship, until now.” 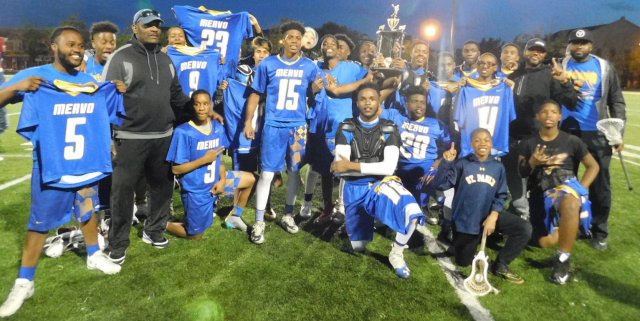 The wait is also over for Mervo, which ended a 13-year title drought. Shamar Collymore had four goals for the Mustangs, and senior Dayon Foster added three goals and an assist.

The Hillen Road school scored the final four goals and got clutch goalkeeping from sophomore Ishmael Abdul-Ghani to win its first city title since 2004. The Mustangs (10-1) lost to City College in the A final last year and dropped a 9-8 decision during the regular season.

Even down 4-0 early Monday, the Mustangs believed it was their time.

“This is basically the same team from last year and a rematch from last year, which we lost, and they were just hungry this year,” said Mervo coach Martin Church, in his 25th season. “It was like, ‘We’re not going to lose it this year.’ “

“I don’t want to leave school without a championship and you all shouldn’t either,” Foster said to his teammates at halftime.

Down 6-4 at halftime, Mervo pulled even at 7 as sophomore Ramone Allyne got a groundball and fired a shot into the goal. Foster gave the Mustangs the lead, with a finish off Collymore’s pass.

Mervo capitalized in extra-man as Foster completed his hat trick with 1:54 left in the third quarter.

Abdul-Ghani, who didn’t any saves through the three quarters, stopped four shots in the final period to derail City’s comeback hopes. The Mustangs, with sophomore defenders Ernest Georges, Byron Kilson, William Reason, kept City off the board the final 17 minutes of regulation.

“My teammates pulled me up and I want to thank them,” said Abdul-Ghani, who was a midfielder last season. “I owed them that third and fourth quarter.”

Monday, the Alameda school struggled with turnovers and poor passing in the final minutes. It was City’s first loss in the city league play since the 2015 final (lost to Poly).

“We just ran out of gas,” said Knights coach Anthony “Merk” Ryan, who didn’t have top scorer Derian Sturdivant because of injury.

After the game, an emotional and energetic Foster did several flips on the Dunbar turf. The Mustangs outscored City, 6-1, in the second half to win its third city championship (won B Division title in 2003).