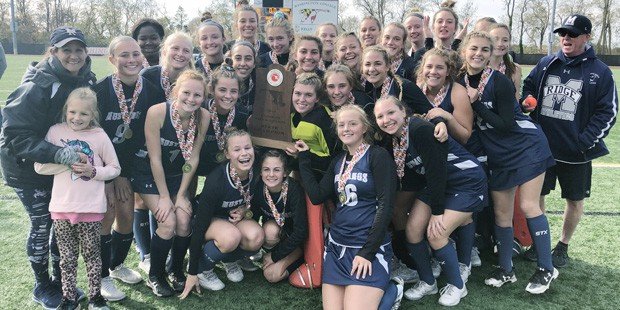 Mustangs break through for their first field hockey state crown 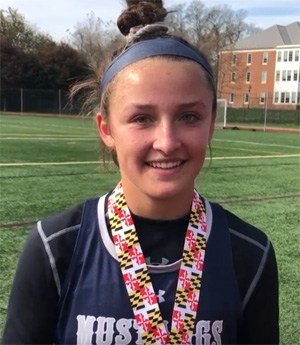 Freshman Maisy Clevenger started the year on JV, but worked her away into the varsity starting lineup and scored the only goal in Marriotts Ridge’s 2A state championship victory.

Winning a championship is a process. Most teams get close and fail, at least once, before eventually claiming the top prize. For Marriotts Ridge that close call came four years ago when the Mustangs reached their only state final and came away with a 2-1 loss to Hereford.

The Mustangs gave a hint that their time may have finally arrived on Thursday when they faced Hereford once again, in a state semifinal battle at Broadneck, and defeated the 6th-ranked Bulls, in a shootout, after playing to a 1-1 draw through double overtime.

Saturday morning in the 2A state final at Washington College, Marriotts Ridge proved it was indeed time to raise a state title banner on their Howard County campus, as the Mustangs defeated Oakdale of Frederick County, 1-0.

Despite dominating possession and having an overwhelming edge in scoring opportunities, the Mustangs managed just one goal, but it was enough.

The championship goal came with 21:36 to play in the half, off the Mustangs seventh penalty corner of the game. Senior Megan Hettinger received the insertion 22 yards from the goal and crushed a hard bouncing shot right through the middle where freshman Maisy Clevenger tipped it into the goal.

According to Hettinger it’s a play the Mustangs have practiced repeatedly.

“We work on it a lot in practice and it was really good to be able to finish,” said Hettinger. “Our goal is just to get it to the post or in the corner and I was just trusting my teammates and we got it in.”

Clevenger, who’s older sister Eloise is a senior and one of the Mustangs top scorers, was an unlikely hero. She started the season on the junior varsity and had to earn a spot in the starting lineup once called up to the varsity.

“It feels great,” she said. “We all worked very hard to get here. I went from JV to varsity and then got a starting position. We got here and having it all leading to a goal feels great.” 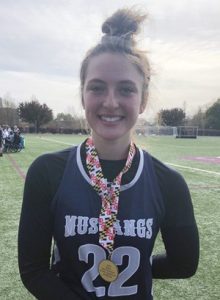 Marriotts Ridge senior Megan Hettinger’s big second half drive produced the assist that helped the Mustangs claim a 1-0 win over Oakdale in the 2A state final.

Clevenger said her teammates were not upset in the least that a freshman stole the spotlight.

“I think they were happy for me,” added Clevenger. “I didn’t see any long faces after I scored it. They all gave me big hugs. It felt great.”

At that point, the Mustangs were just excited to be on the scoreboard.

Marriotts Ridge dominated the possession in the first half, consistently creating opportunities in the circle and generating five penalty corners and three shots on goal. Oakdale, in contrast, crossed into the offensive end just a handful times and only once went as far as the circle with clear possession. The Bears generated zero shots in the opening half.

Still, the game remained scoreless into the intermission.

The pressure was sustained in the early going of the second half and a breakthrough goal for the Mustangs appeared inevitable.

The Mustangs’ best chance of the first half came at the 21 minute mark on a play nearly identical to the one which later produced the goal.

Senior Emma Gladstein, the team’s leading scorer and a University of Delaware recruit, inserted a penalty corner which Hettinger received at the top of the circle and sent back with a low, hard shot that was saved off the leg pad of Oakdale goalkeeper Hannah Ware.

“It feels so amazing,” said Hettinger. “Everyone on this team is so amazing. We all work together. It is so awesome to be a part of this group. We have worked so hard in practice. We try our best in every game and I think, this year, we all worked together super well.”

Marriotts Ridge coach Stacie Gado pointed to Thursday’s win over Hereford as a definite stepping stone to the championship.

“For me, that’s definitely a big accomplishment, that milestone of getting back to the state final and beating Hereford,” said Gado. “None of these girls playing now were here four years ago. Some of their older sisters were here, so they’ve been around it, and for them to get the job done means a lot to me and it means a lot to them.”

According to Gado, the seniors definitely led the way, even if a freshman topped it off.