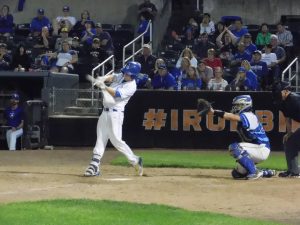 X marks the title: Xander Waddell’s connects for what would be the game-winning hit to left in the bottom of the ninth inning for Old Mill in Friday’s Class 4A state baseball final. The Patriots scored twice in the seventh before Waddell’s single completed a stirring 4-3 victory over Sherwood at Ripken Stadium.

Old Mill High’s baseball team simply eschewed adversity and kept on pushing toward the ultimate and got it at Ripken’s Leidos Field in Aberdeen Friday night winning a classic Class 4A State championship game with a 4-3 victory ove Montgomery County’s Sherwood in 9 innings.

In attaining their fourth state baseball championship and first since 2003, the No. 10 Patriots notched the 31st title for Anne Arundel County, the most of any county or jurisdiction in Maryland. The Millersville school did it symbolizing it incredible turnaround season.

It’s likely the most incredible finish of any Anne Arundel County team, starting 2019 at 5-8 and appearing to be out of it, let alone win a state championship. The Patriots (17-8 overall) reeled off 12 consecutive wins to claim the coveted state championship trophy.

Xander Waddell delivered the fourth straight single by the Patriots in the bottom of the ninth inning to score Eric Mondragon with the game winning run to make a winner out of sophomore reliever Kevin Curran, who pitched two sterling innings.

The big hit came after Old Mill rallied for two runs in the bottom of the seventh and had the winning run on third with no out, but couldn’t get him home. Old Mill had scored its first run in the third inning on a double steal off the intentional pickoff first, rundown and subsequent steal of home by Caleb Bailey.

“We’re fighters, we overcame a lot of adversity this season,“ understated Waddell afterwards. “We started off 5-8, snapped back into it and have been fighting ever since. Even after that seventh, we kept fighting and we were confident we would get it done.

I went up there (with bases loaded) and was just hoping to get the ball in the air and luckily I got a good pitch to hit and drove it the opposite way (left field) and it landed. It was surreal.”

It set off the fireworks as the Patriots built a pile of humanity on the baseball diamond.

“That’s what we have done all year, at least the second half of the season, “ third-year Old Mill coach Charlie Chaffin summed up the team’s unbelievable run to the crown. “They kept on grinding.”

Xander Waddell was among several heroes for Old Mill Friday evening. The Patriots, once 5-8, won their final 12 games to claim their fourth state title.

Old Mill lost its best all-around player in Nick Cinquanto, a returning All-County second baseman, in his first at-bat of the season when he was struck in the face by a pitch and broke both his cheekbone and orbital bone.

It appeared  he was out for the season, but just like his team he kept fighting to get back and did just around mid-season. His return meant a lot to his coaches and teammates and the rest is history.

Sherwood (22-2), seeking its third state title (others 2008 and 2010) took a 3-0 lead in the first inning putting up another roadblock for the grinding Patriots. Warriors’ designated hitter  JP Yore drilled his first of two triples on the night to go with a two  base-knock, to score two runs after Bradshaw Steeley’s sac-fly had sent the first run home.

Senior righthander Hunter McKean (6-1), who had pitched back-to- back shutouts in the playoffs,  walked the first two batters he faced after walking only 5 in his first 53.2 innings of the season, but he got it together. He retired the side in order in the second inning and rung up goose eggs the rest of the way.

“I found my groove and it was  game on, “ said McKean, who came out after throwing 108 pitches through seven innings with the score tied at 3. “We were hungry and wanted this.”

McKean gave way to Curran whom he said of, “I love that kid. He has done the job coming in and I knew we had it in us to get it done.”

Curran responded to the pressure, getting the first two Warriors in the top of the eighth before Yore ripped his second triple but was left stranded when Curran got Jack Braun to fly to left. Cinquanto started the bottom of the eighth with an infield hit and Christian Murphy would reach on a hit-by-pitch by Ian Brady who had relieved starter Ben Vok in the seventh, but both were left stranded.

Sherwood went down in order in the top of the ninth as the change-up that Curran had showed in the eighth, got even more nasty. Curran struck out two, finishing with three K’s in his two-inning stint.

The kid displayed exceptional poise on the bump despite being under intense pressure, not willing to give the Pats’ remarkable season away after their unforgettable run.

“I came into a game against Chesapeake (5-2 win for Old Mill) and pitched four innings and ever since I’ve been coming out of the bullpen into situations like this.,” said Curran. “At the beginning of the season, I was told my time would be limited and that I had to prove myself. I earned the role and stuck with it.”

Chaffin had total confidence in Curran.

“You’ve got to love that kid,”said Chaffin. “He’s a 10th grader and pitches like a senior. Can’t wait to see him as a senior. He finds a way to calm down, has great composure and trusts his defense.”

After Curran’s exceptional stint, Old Mill finally put it away in the bottom of the ninth. Eric Mondragon singled to left and No. 9 hitter Caleb Bailey got his second single of the night.  Leadoff man Ian Adams laid down a perfect bunt for his third knock (also had a double) of the game to load the sacks.

Waddell worked the count to 3-2 before sending a laser down the leftfield line easily scoring Mondragon and setting off a celebration 16 years in the making.

“I knew we would come through,” said senior first base Shayne Smith, whose base knock in the seventh drove in a run, and set off two Warrior miscues scoring a second run to knot the score at 3-3 and send the game to extra innings. “There is no better feeling (the title win) on the last ride with your boys.”

Anne Arundel County had won only five titles over the last 10 years. Anne Arundel county notched its first state baseball championship in the MPSSAA inaugural season of 1975 with Northeast under the late Harry Lentz and the most recent in 2015 by Southern,

Old Mill’s latest crown was extra special to John Murphy, an All-County first baseman (.379, 19 RBI) for the 1989 Old Mill state champion squad. His son, Christian, is the starting third baseman as a sophomore for the new 4A champ Patriots..

Pair of champs: Thirty-years after John Murphy (right) won a state title with Old Mill, Murphy’s son Christian, who started at third base Friday, joined him as the Patriots won the 4A state title. The elder Murphy was the starting first basemen on the Old Mill’s 1989 title squad.

“Words can’t express how proud and happy I am for him (Chris) and the team, “said John Murphy. “It really is a Cinderella story what this team  has been through this season to end up a state champion. It’s beyond any words or feelings I could possibly have.”