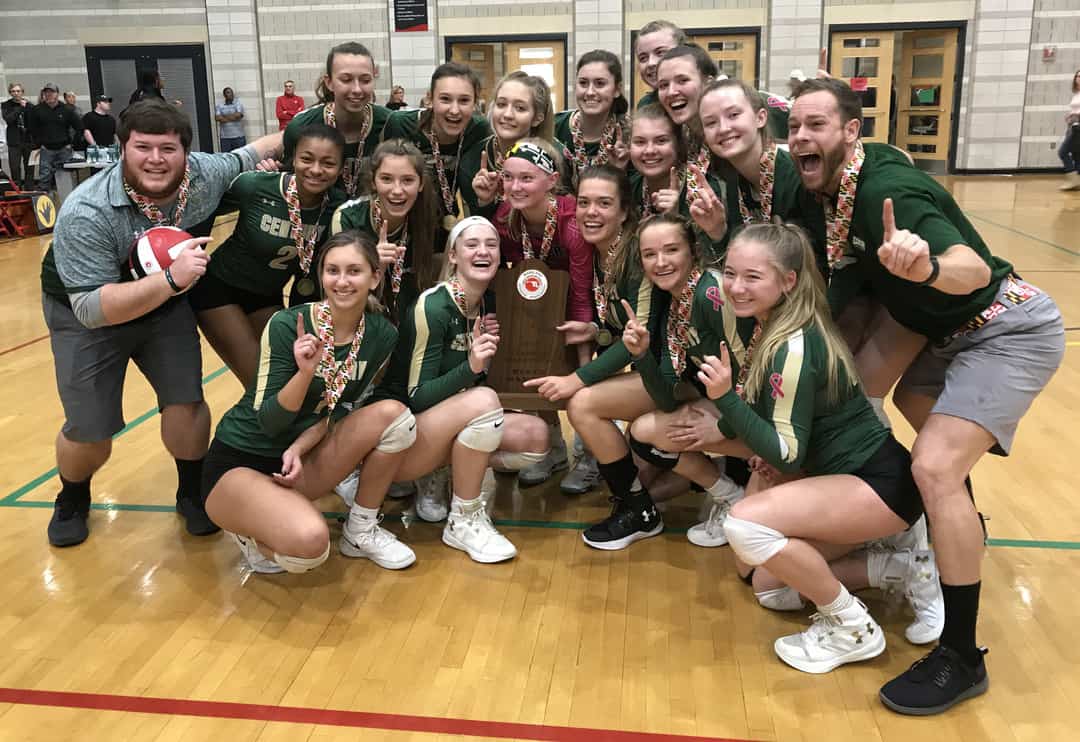 After her Century High volleyball team won the Class 2A state championship Saturday afternoon, Caroline Kennell joked that all of her tall friends were angry that they hadn’t played volleyball.

Kennell and her teammates were certainly in an enviable position after the No. 14 Knights defeated Frederick County’s Oakdale, 25-19, 25-19, 20-25, 25-16, to win the program’s second volleyball title at Ritchie Coliseum in College Park.

“We’ve been talking about it for four years and it’s a dream that became a reality today. It’s really awesome,” said Kennell, one of six Knights seniors.

“I think it comes wit the serve receive,” Mastria said, “because when we get that good pass to Ali, then she’s able to use all of her options which makes it tougher for the other team to get their block up and set their defense up when they don’t know where she’s going.”

In the first two sets, the Knights (17-2 overall) didn’t make a lot of mistakes. They had an attacking percentage of more than 60 in both sets with a total of just seven hitting errors. Missing eight serves, however helped the Bears (17-2) stay close.

In the third set, the Knights had eight service errors, including one on each of the last four rotations.

Oakdale coach Jim Dorsch noted serving as an issue for Century in his scouting report.

“Today for the most part they served better than we did and they received better than we did and that was the difference in the match,” Dorsch said. “That third set, they missed, I think, nine serves which is something that we had seen happen other times, but the other three sets, they served really well and put us under pressure and that was the difference.”

It also didn’t help the Bears to be without senior setter Sydney Katz, who tore an ACL in the regional semifinals. Still, Jenna Harding dished out 16 assists. Jess Twilley and Jen Chomiak had nine kills each.

Century stumbled briefly, in part, coach Bryan Trumbo said, because they succumbed to nerves after winning the first two sets. The seniors remembered that the Bears defeated Century on their way to the 2017 state title. Last week, Bears dethroned defending state champion Williamsport in the regional final.

“We were like, ‘Oh. Oh. Oh. Oh, no,’ and I think just trying to keep it cool,” Trumbo said. “Volleyball’s a different sport than any other sport. You make mistakes. As a coach I don’t try to berate … so I think we just tried to shake it off, shake it off and knew we were going to get the next point.”

In the fourth set, the Knights had most of the momentum. Although they could put together only one run of more than three points, they had 12 kills in the final game and a 70 attacking percentage.

To finish out the match, Brandt had a block and a kill to boost the lead to 24-16 and then Mary Huber sealed it with a kill.

“I didn’t think it was real until it hit the ground,” Knights libero Ally Everton said. “I didn’t even notice that the score was almost 25 and then when it hit the ground, I just looked up and saw it turn 25 and I just started crying.”

The Knights have won the championship both times they qualified for the state tournament — coached by brother and sister. Becky Groves coached them to the 2011 championship.

The Trumbo siblings had a good role model — their father, Dave Trumbo, coached Liberty to state titles in 2003 and 2004.