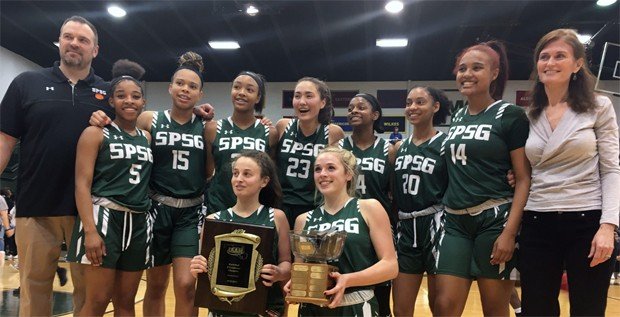 It must have been Destiny for St. Paul’s School to capture the IAAM B Conference basketball championship Sunday evening at Stevenson University.

And Devan, Esprit, Alex, Ava, Laurie, Madison and every other Gator, too, who contributed to the 57-48 victory the Brooklandville school pulled off over No. 5 Mount de Sales Academy to earn the program’s first title since 2009.

Yet it was Destiny Ryles, whose clutch play was desperately needed after the top-seeded Sailors stormed back from a 17-point deficit to within a bucket with just over two minutes to go in regulation on a 3-pointer by senior wing Kristen Zaranski.

Ryles, who scored 30 in a semifinal triumph over Our Lady of Mount Carmel in the semifinal round, added 21 in the final Sunday for the Gators (18-3 overall). She cooly drained a pair of free throws at the two-minute mark before converting a steal into a layup to make it, 46-40, with time running out on Mount de Sales’ first-ever title bid.

Moments later, senior Devan Conrad’s back-breaking three-pointer, hoisted fairly early in the shot clock, really put a damper on the Sailors’ comeback by upping the margin to 49-40 with just over a minute remaining.

“Coach Pat (her dad, St. Paul’s coach Pat Conrad) is always telling me to take the shot if I’m open,” Devan Conrad said. “I was kind of thinking I was open and that I could seal the win.”

Her dad said that while he does encourage any of his shooters to launch when appropriate, he wasn’t sure if that was the proper time.

Mount de Sales (23-4), which had not lost since December, was riding a 12-game winning streak and was unbeaten in conference play, grabbed a 5-1 lead early in the contest but never found the range from beyond the arc — typically a team staple.

“We just couldn’t get a rhythm on offense,” Sailors coach Trish Armstrong said. “We were sleepwalking a little bit in the first half. St. Paul’s was the better team today. They outplayed us.”

St. Paul’s, which tied the score at the end of the opening period, took its first lead midway through the second quarter when Ryles buried a three-pointer from the top of the key for an 18-15 advantage.

Then freshman guard Madison Beale converted one free throw and missed a second attempt that Conrad tipped in to boost the cushion to 21-15.

Ryles followed that effort with a steal-and-finish and the lead swelled to 23-15 prior to her nailing another triple as the Gators headed into the intermission on top, 28-19.

Unfortunately for the Sailors, St. Paul’s was just getting started.

The Gators opened the third period on an 8-0 run fueled by a layup by freshman forward Laurie Satchell and back-to-back threes by Conrad and senior guard Ava Wax to build a 36-19 bulge.

Mount de Sales regrouped to cut the deficit to 37-27 by the end of the quarter on a stick-back by senior wing Rachel Krug, a baseline drive by senior guard Maura Devine and four consecutive free throws by junior forward Megan Matsko — a St. Paul’s transfer — and Zaranski before sophomore forward Esprit Cha answered for St. Paul’s with a free throw of her own.

Eventually, the Sailors would dig deep to claw within 46-44 with just over two minutes remaining in regulation on a Zaranski three-pointer from the corner.

Ryles and Conrad put the end to the notion that Mount de Sales would be able to rally all the way back.

“It’s my job as captain to settle the team down,” Devan Conrad said. “We had to cool down the level of play.”

Devan Conrad said that the Gators’s win over second-seeded Mount Carmel put them on “Cloud Nine” while preparing for the Sailors
.
“They were definitely favored,” she said. “So it was almost like we had nothing to lose and everything to win.”

Pat Conrad said that his team had to defend well and win the battle on the boards to take the title.

To that end, he exhorted his team to play no-help defense against the Sailors, who excel at finding an open teammate when double-teamed.

To keep the high-scoring Zaranski from going off like she did for 34 points when the teams met in mid-January, Pat Conrad made sure that his daughter, Cha and Beale took turns guarding the Sailor sharpshooter.

It worked, although Zaranski still led Mount de Sales with 20 points in the setback.

“Pat had a good game plan for us,” Armstrong said. “But Kristen still had 20 — a sneaky 20. Sometimes I’ll think she only scored 10 points and find out she scored 20.”

Regardless, it wasn’t enough to prevent the Gators from claiming their second-ever IAAM crown.

“We’ve had some strong teams in the past that didn’t win,” Pat Conrad said. “But this is the most complete team I’ve had here because of our versatility. We have kids who can play multiple positions.”