Century shows its best against the best 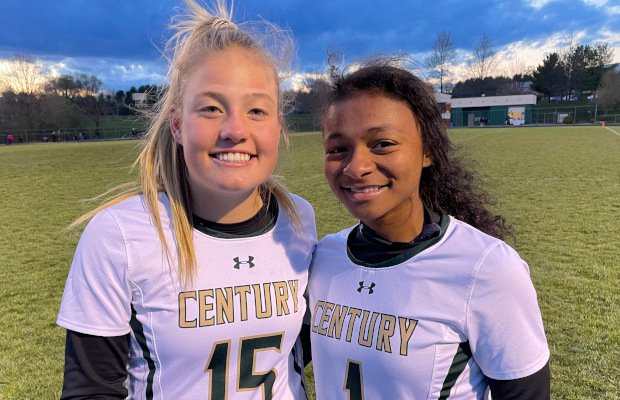 No. 6 Knights rout No. 17 Westminster, following wins over a pair of state champions

At the beginning of last week, Century girls lacrosse coach Becky Groves wondered how her team would respond to a close contest after blowing out its first four opponents.

The No. 6 Knights proved they would be just fine after wins in the past eight days over two defending state champions and three of their top Carroll County rivals.

The biggest win, 9-7 over then-No. 3 and defending state Class 4A champion Broadneck, came on Saturday at Liberty’s 4 Champions 4 Causes Tournament. The Knights then defeated defending Class 1A state champ Liberty, 11-9, to win the tournament title. Last week, they also beat No. 15 Manchester Valley, 13-8, and Catonsville, 20-5, and Tuesday night, they topped No. 17 Westminster, 17-8.

The Westminster game, coming so soon after the tournament victory, could have been a trap game for Century. Instead, Jasmine Stanton and Lauren Hackett scored six goals each as the host Knights (9-0, 3-0 county) claimed sole possession of first place in the Carroll County Athletic League and remained the county’s only undefeated team.

“We learned that we can fight through anything,” said Stanton, a speedy junior attacker headed for Clemson. “We had five back-to-back tough games. Everyone’s tired. You can fight through fatigue and we’re still hustling and pushing through and everyone’s contributing and doing great.”

The Knights withstood early pressure against Westminster (7-2, 2-1) as the Owls scored first and won the first three draws.

Paige Moreland’s free-position goal gave the Owls the lead about three minutes into the game, but the Knights forced a turnover after Emma Hawks won the next draw and goalie Jenelle Balchune saved an Owls shot after Delaney O’Brien controlled the next draw.

Stanton and Hackett converted those turnabouts into free position goals that kicked off a 6-0 run for a 7-1 Century lead with 13:38 left in the half. The Owls could not get closer than within three the rest of the game.

“Coming off the weekend, I think a lot of us were tired. We played two long hot games, so to come into the freezing cold tundra was a little different,” Hackett said with a laugh after a gusty wind made Tuesday’s temperature feel like the mid-30’s, “but we came out here and really pulled together as a team. From defense to offense, I thought it was great.”

After Stanton scored four of the Knights’ first five goals, the Owls face guarded her. They also face guarded Hackett, a senior attacker bound for Salisbury, later in the game. The duo still combined for 20 of the Knights 36 shots.

Late in the first half at Century, Westminster rallied with three of the final four goals. Jess Kent and Belle Dintino, who combined for five goals in the game, scored back-to-back to cut the lead to 7-4. After Hackett rolled the crease and slipped in a low shot, Kent scored on a feed from Moreland to keep the Owls within three at the break.

The Knights, however, opened the second half strong as Delaney Sandbank scored on an assist from Anna Hackett. Then Lauren Hackett added two goals within 30 seconds to run the Century lead back to six, 11-5, with 17:04 to go.

For first-year coach Jocelyn Jamison, the loss stung the same way it did when she was an Owls player, but she was pleased with her team’s aggressive redefending, something the Knights took a while to adjust to, and the way they fought to the end.

“I think it just shows the girls how hard they have to work,” Jamison said. “You can always learn from a loss. It’s something you can turn into a positive. You can’t win them all and when you lose, you have to grow and adjust. I’m super proud of the team. I know this is a big transition year with me coming in and there’s till plenty of season left.”

Pictured above: Century’s Lauren Hackett (15) and Jasmine Stanton (1) scored six goals each in Tuesday night’s 17-8 win over No. 17 Westminster. The No. 6 Knights have won five games in the past eight days, including two over defending state champions and three over top Carroll County rivals, to remain undefeated and take over sole possession of first place in the Carroll County Athletic League.