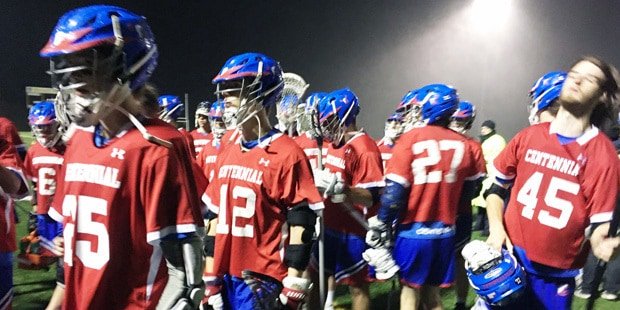 An epic comeback bid by Centennial fell a goal short in a Class 3A boys lacrosse state semifinal in a driving rain on Friday night at Mount Hebron.

The Eagles (13-5) rallied from an 8-3 deficit against Northern-Calvert late in the first half and came very close to tying the score several times in the waning moments before falling to the Patriots, 12-11.

“We’ve been in that situation before,” Centennial coach Nick Kellinger said. “We believe in our guys, and we know our guys are good enough to come back. We just had to make some stops on defense against a really, really good offense.”

Northern’s offense was prolific and unafraid to take shots from any angle or depth.

The Patriots (18-1), whose only loss this spring was to Landon, were led by Abe Hubbard. The senior attackman pumped in six goals — all in the first half — to set the tone for what turned into a shootout.

Trailing by five goals late with under a minute left in the first half, Centennial sandwiched goals by senior attackman Thomas Thurmond and junior longstick Stafford Smith around one by Northern’s Mason Chaney to make it a 9-5 deficit at the intermission.

By the end of the third quarter, the Eagles were still trailing, 12-9, but were charging into the final period on a wave of emotion after senior midfielder Michael Pellegrini scored with 28 seconds left in the quarter.

Centennial junior attackman Peter Krawcyzk opened the final frame with a goal and the Eagles were really cooking when leading scorer Jeremy Wilson inched them within a goal on a laser to the far left corner with under eight minutes remaining in regulation.

On a breakaway with just under two minutes left, Huntington sophomore goalie Alex Sheehan made the save of the game to keep his team in the lead as Centennial put on its final surge.

“It was just about getting the ball to our offense — we have some really dynamic players down there,” Kellinger said about the comeback. We just came up a little short.”

“Centennial really worked hard in the third quarter and early in the fourth quarter to get back in the lacrosse game,” Northern coach Joe Casalino said. “We had to try to match their intensity. Our young keeper struggled a little bit, but he came through when it really mattered.”

The Patriots will play the winner of the No. 18 Towson-No. 11 Westminster game on Saturday for the state title next week at Stevenson University.