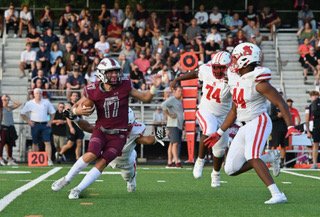 by Derek Toney
From an overflowed parking lot – where some spectators had to walk nearly a quarter-mile to the field – to spirited student sections, Friday’s Archbishop Spalding/Broadneck football game captured the long-awaited essence of Friday Night Lights.
The only thing missing was a climactic ending. The third-ranked Cavaliers defeated the No. 6 Bruins, 44-13, at Lawrence E. Knight Stadium in Cape St. Claire.
Senior running back Jordan Harris rushed for 162 yards and two touchdowns for Spalding (2-0 overall), and Nick Guiterrez scored a pair of touchdowns. Senior quarterback Josh Ehrlich threw two scoring passes for Broadneck (0-1).
The Cavaliers ran off 30 unanswered points in the second half, turning the anticipated match of Anne Arundel County neighbors into a rout. It’s believed to be the first time the schools, separated by 22 miles, met in football.
Final score aside, both teams relished the ambiance.
“It was like a welcome back to football,” said Spalding coach Kyle Schmitt, whose team played two games late last fall before its shortened season was shuttered due to COVID-19 concerns. “It was awesome.”
“These kids on both teams got to feel what it’s like, they got to feel the excitement, the rush, the pageantry,” said Bruins coach Rob Harris, whose team played during the spring with a limited attendance. “The student section for us was phenomenal, their student section was awesome. It was a great high school football game and these kids had not done that in two years.”
The first matchup of VSN’s Top 10 teams of 2021, at least in the first half, lived up to the hype. Spalding scored on its first two possessions – a 13-yard touchdown pass from Nick Guiterrez to sophomore Tyler Brown and seven-yard run by Harris, set up by Jason Robertson’s fumble recovery – for a 14-0 advantage.
Broadneck quickly answered. After a sure touchdown pass was dropped, Bruins senior quarterback Josh Ehrlich dialed up again and, this time, a wide-opened Davion White caught the ball and sprinted to the end zone for a 70-yard play – Broadneck’s first score of 2021.
The Bruins’ defense recorded a three-and-out, and the offense acquiesce. Ehrlich, who scooted 20 yards on third-and-long, threw a 38-yard score to Eli Harris with 7 minutes, 37 seconds remaining before halftime. Broadneck missed the extra point, allowing Spalding to maintain the lead.
The second half was a different story. Spalding got possession to start the second half, and methodically went 69 yards in 10 plays as Guiterrez sliced into the end zone from three yards out.
The Cavaliers got a safety, then went 52 yards in seven plays after getting the free kick. Guiterrez, who accounted for 31 yards, called his number and got into the end zone from 10 yards out.
“We were prepared to play four quarters,” said Guiterrez. “The offensive line did a great job creating holes for us…we don’t quit until the end.”
The Severn private school’s size on both sides disintegrated Broadneck in the second half.
“We definitely had mistakes in the first half, especially in the secondary,” said Cavaliers senior defensive back Mansoor Delane, a Virginia Tech commit. “We worked on echoing the calls and we made those adjustments. It paid off in the second half.”
Spalding put together an 80-yard drive, capped Harris’ six-yard score early in the fourth quarter. The Cavaliers, set up by Delane’s interception, went 53 yards in five plays as freshman backup quarterback Malik Washington finished the scoring with a one-yard dive.
Spalding rushed for 405 yards Friday.
“I think our program is really built around the guys upfront on both sides,” said Schmitt. “Obviously, we’ve had great success with the DBs (defensive backs) and skill positions, but our guys upfront are the soul of the program.”
Ehrlich accounted for 252 yards (196 passing) Friday for Broadneck. The Bruins had the momentum, but after Spalding’s first drive in the second half, shortly followed by a high punt snap going out the end zone for a safety ending Broadneck’s first possession, it was downhill.
It was a numbers’ game, according to Harris.
“We had to play o-linemen on the d-line (defensive line) and it was basically too much,” said Harris. “Their o-line is very talented, the physical toll on playing both ways was too much. It affected us offensively in the second half because we didn’t have the energy. I do feel very good about some things we were able to expose, but didn’t capitalize on all of them.”
Harris, whose team is considered the favorite to win the Anne Arundel public title this fall, said playing the likes of Spalding, and, in a couple of weeks, Montgomery County private stronghold Bullis School, will serve his team. The Bruins hope to contend for the Class 4A state title which has been dominated by Prince George’s County’s Wise and Montgomery’s Quince Orchard and Northwest over the past decade.
“We still think we’re a pretty team and can hang with mostly everybody,” said Harris, whose team saw two turnovers lead to 14 Spalding points and had a missed field goal. “For two quarters, they (Spalding) were nervous.”
“Incredible effort by Broadneck, Ehrlich is a really good player and impressed with how he competes,” said Schmitt. “I think our size rolled a little bit in the second half…There was no big halftime speech, just stick with what we’re doing and the defense made the correct adjustments.”