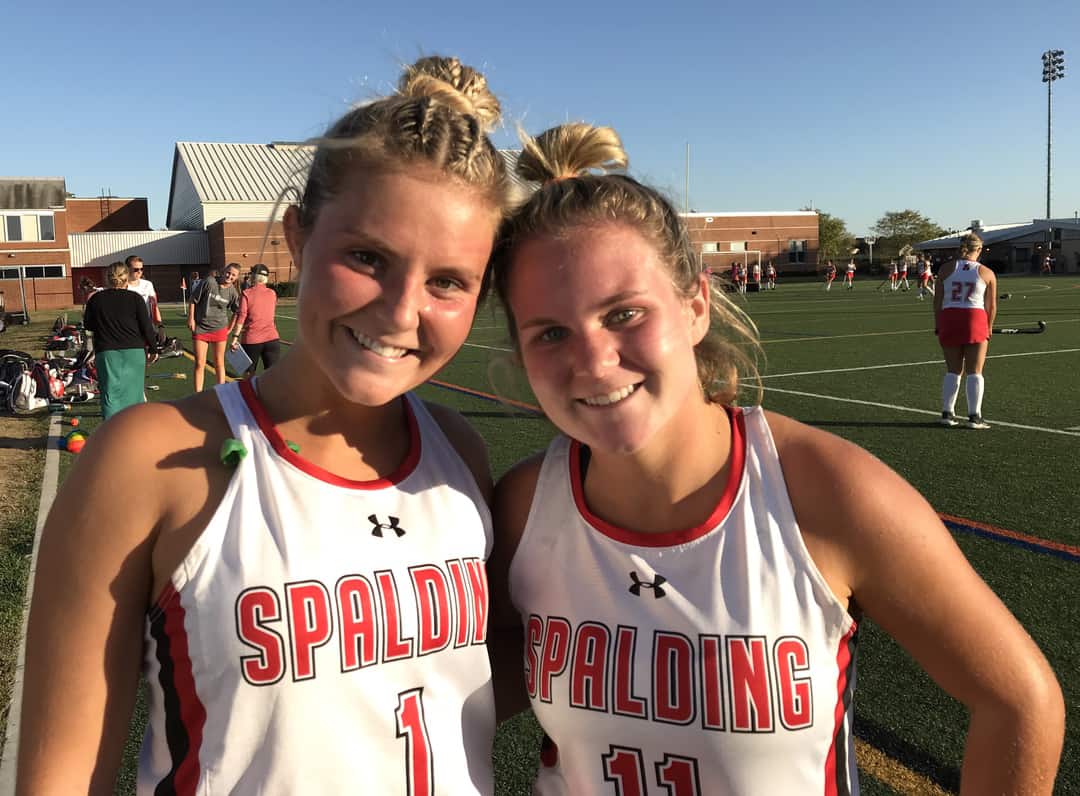 Lindsay Beardmore (left) scored two goals, with Katie Fichtner providing an assist for Archbishop Spalding field hockey Monday against Garrison Forest. The top-ranked Cavaliers gained sole possession of first in the IAAM A Conference with a 3-1 decision over the No. 3 Grizzlies in Severn.

She trusted the No. 1 Cavaliers to be ready for Monday afternoon’s rematch with third-ranked Garrison Forest School, the only IAAM A Conference team to beat them this fall.

The Cavaliers didn’t let her down, dominating most of the action en route to a 3-1 win and their eighth straight victory. Their energy ebbed only for a few minutes at the start of the second half. Otherwise, they kept attacking, intercepting passes and frustrating Garrison Forest’s transition.

Brady said her players “made this game a priority over Homecoming. They came to play.”

Senior Lindsay Beardmore, who scored twice, said that after the long weekend, the Cavaliers had one main goal in mind.

“We wanted to make sure we came out from the start just pushing ourselves to every single ball,” Beardmore said

Beardmore gave Spalding the early lead with the first of her two goals scored a little more than 10 minutes into the game. Garrison’s Ryleigh McComas tied it on a penalty corner with 9:26 left in the half, camping beside the left post to redirect Natalie Freeman’s pass.

The Grizzlies, however, couldn’t maintain the momentum. Early in the second half, however, they had some chances.

The Cavaliers defense of Caitlyn Koehler, Lily Grant and Shelby Miller fought off about five minutes of steady Grizzly attack early in the second half. Goalie Sophie Somerville made two of her four saves during that stretch.

Brady called a timeout to try to recapture the first-half energy.

“It seemed like we were a little discombobulated,” Brady said. “We said, ‘Hey guys, take control of this game again,’ and we just started going to every single ball. Especially after we scored that second goal, [Garrison’s] only option was to try to big ball it a little bit and we said to our defense, ‘Drop back six or seven yards and to the next group, hold your position,’ and they had to go around us which made them work hard and took time to work the ball down the field.”

Bridget Donovan, who assisted the first goal, scored off a penalty corner with 10:52 left for a 2-1 Spalding lead.

Katie Fichtner then sparked an insurance goal for the Cavaliers when the Grizzlies tried to pass out wide from the top of their circle where the sophomore stole the pass and fed Beardmore open in the circle with 5:48 to go.

“We were watching film this morning and we knew they were going to try to transfer, so we were just ready to sneak up and grab that ball,” Fichtner said. “I drove baseline and I pulled left and then I saw Lindsay.”

The Grizzlies, whose other conference loss came 2-0 at No. 6 McDonogh School on Sept. 27, struggled with their passing game, something that surprised the Cavaliers, who noted Garrison’s strong passes in the first meeting.

“It felt like they constantly had the ball,” Garrison Forest coach Malcolm Belin said. “Then we’d try to get it and make something work and it just wasn’t working for us. They might have wanted it a little bit more than us at certain spots and we just can’t let that happen.”

After the game, while the Grizzlies talked about recovering from the loss, the Cavaliers celebrated the win but didn’t want to get too far ahead of themselves with two conference games left including Wednesday against McDonogh.

“It feels great,” Fichtner said. “I just feel we need to keep working though because it’s not all set in stone, so we just have to go hard the rest of the season.”