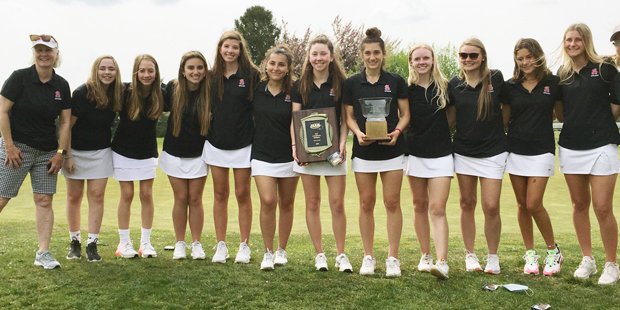 Lauren Lombardo kept her cool after what could have been a disastrous fourth hole at Fox Hollow Golf Course on Wednesday afternoon in the final round of the IAAM A Conference tournament.

The Archbishop Spalding senior, who went into the final nine holes with a two-stroke lead over Bryn Mawr’s Lucy Boucher and a four-stroke advantage over teammate Megan Garmey, struggled on the par-five fourth with a triple-bogey.

“I got stuck in the trees,” Lombardo said.

Meanwhile, Garmey was the polar opposite, carding an eagle on the hole.

“She hit the pin — and it went in,” Lombardo said with a big smile.

Even so, Lombardo was determined to get back on track right away, something she did when she parred the fifth hole before earning birdies on two of the final four holes to win the individual championship and help the Cavaliers to the team crown.

Lombardo (77) still finished five strokes clear of Boucher and Garmey, who tied for second with 82’s.

Lombardo firing that eight didn’t hurt the team as much as it could have, owing to the fact that Spalding junior Rika Felton’s par, combined with Garmey’s eagle, gave the Cavaliers a total of eight strokes on the hole because of the four-player team format that uses the top-two scores on each hole.

“I’m really proud of Rika and Anna (Scott),” Lombardon said. “They were able to do better than they did yesterday.”

“I was a little worried (by Lombardo’s eight),” Spalding coach Leslee Brady said. “But knowing that Megan had an eagle made me feel better.”

The Cavaliers (151), who had a five-stroke advantage over Bryn Mawr (158) in the team chase after the opening round, stretched the lead to seven strokes over the defending champs on Wednesday.

“It was a total team effort,” Brady said.

Garmey and Boucher tied for second for individual honors.

Lombardo said that she never worried about falling behind Boucher or Garmey.

“I just wanted to have fun,” she said.

After all, she and Garmey have been playing together since they were five at Chartwell Golf and Country Club in Severna Park.

Lombardo, who will play the sport at Catholic University in the fall, was the third-place finisher in 2019.

She added that she’s usually at her best when using irons, although other facets of her game are a little more fickle.

“One day, I’ll drive the ball well and my putting is off,” she said, noting that sometimes she’s not good off the tee and her short game is clicking. “It depends on the day.”

It was the first-ever IAAM golf title for the Brooklandville school.

Pictured above: Archbishop Spalding celebrates its 2021 IAAM A Conference golf title with the tournament championship plaque.