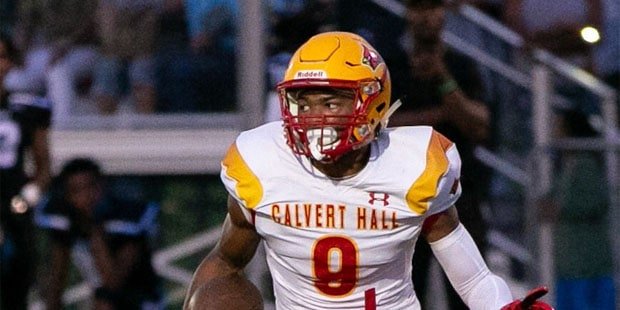 Friday’s non-conference MIAA football battle between Calvert Hall and St. Vincent Pallotti was anticipated because it featured two preseason favorites in the MIAA A and B Conferences, respectively, but the visiting Cardinals proved superior to Pallotti in every way, rolling to a 35-0 win at Fairland Regional Park in Laurel.

Calvert Hall (2-0 overall) got a big night from senior running back and Syracuse University commit Sean Tucker, who rushed for three touchdowns, including a pair of long ones (51 and 67 yards) to lead the Cardinals. The Calvert Hall defense was also lights out as it blanked a potent Panther attack.

Pallotti (1-1), which defeated West Toronto, 20-0, in its opener last week in Canada, could not hold back the Cardinals powerful running game led by Tucker and mustered little offense against the CHC defense.

Tucker scored twice in the first quarter to stake Calvert Hall to a 14-0 lead, which grew to 21-0 at the half with a 3-yard touchdown pass from Amir Jenkins to Cole Herbert. In the third quarter, Tucker broke off his 67-yard scoring flash and Ray Glass added a 7-yard TD run, with just 57-seconds left in the quarter, to bring the running clock into play.

Ty Trinh led the Calvert Hall defense with an interception and a fumble recovery, while Mike Johnson forced a fumble.

Pictured above: Calvert Hall’s Ty Trinh looks for running room after coming up with an interception against St. Vincent Pallotti (Photo courtesy of SportsMajors.com)