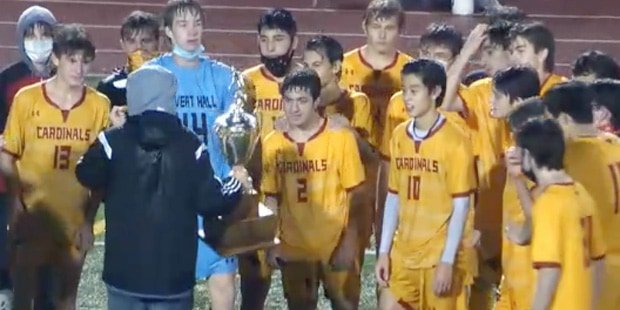 In the pouring rain on Wednesday afternoon at Calvert Hall College, the host Cardinals turned in two strong halves of soccer and defeated rival Archbishop Curley, 4-1, to win the 2020 Reif Cup.

Cardinal senior Hayden Lim was the star of the afternoon, as he played a key role in two goals.

In a year when neither team knew if it was going to have opportunity to play any games, they were able to save this annual tradition. It was Calvert Hall’s second consecutive win in the series, which is now even at 9-9-1.

Calvert Hall (3-1) had the better of the play over the first 15 minutes and capitalized in the 18th minute on a brilliant play by junior Will Andrus. After a pass back from Lim, Andrus dribbled down the right sideline before splitting a couple of Curley defenders as he cut to the inside. He then crossed a low pass that junior Riley Organt one-timed inside the right post.

Lim made it 2-0 with 3:03 remaining in the opening half with another big play. Taking a corner kick from the left side, Lim curled it on goal. Curley freshman keeper Joe Yakim went up uncontested and punched at the ball, but instead of clearing it away, he deflected it down across the goal line.

Curley (2-2) pressed forward early in the second half, but Calvert Hall soon recaptured the momentum. That led to a corner kick from the right side as the clock reached the 20th minute of the second half. This time Lim rolled the ball forward to Richard Monath, who flicked it into the box with a back heal to Payton Madore. His first shot was block, but Madore followed up and gave his team a 3-0 advantage.

The final goal came on a fast-break started by a long punch out by Cardinal keeper Nate Jones. The ball was then played forward to freshman Rocco Pastore who was streaking down the right side. Pastore flipped the ball cross field where sophomore Gabriel Glikin headed home his team’s final tally.

Curley finally got on the scoreboard with 4:01 left. Freshman Andrew Thorneburg centered a ball from the right corner, which Nick Henderson settled and drilled from 10 yards away, inside the left post.

Pictured above: Calvert Hall head coach Rich Zinkand presents the Reif Cup Trophy to his team after their 4-1 win over Archbishop Curley on Wednesday.