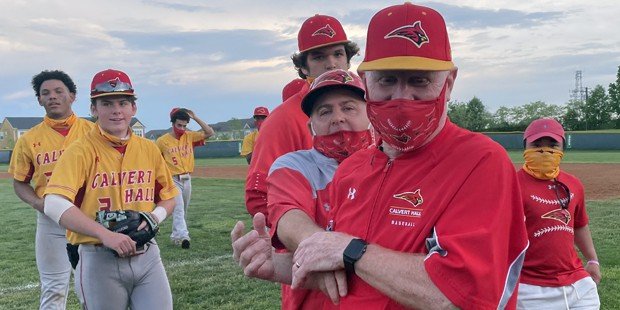 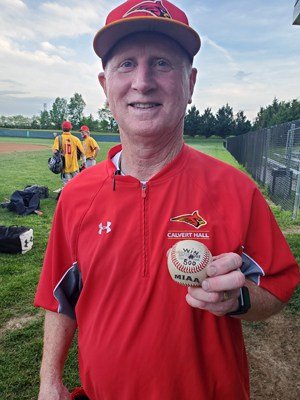 Calvert Hall baseball coach Lou Eckerl shows off the baseball that produced the final out in his 500th career win.

In a game that was an instant classic, not so much for the way it was played, but for all of its twists and high stakes drama, Calvert Hall outlasted Curley, 3-2, in 13 innings to deliver career win 500 to Cardinals head coach Lou Eckerl.

The game had everything from the spectacular to the bizarre. There were diving catches and nifty double-plays. There was a wild double tag out at the plate, and a ton of clutch pitching, especially over the last seven innings, mixed with a slew of walks, wild pitches and strikeouts. There was even three solid innings of rain followed by a spectacular rainbow.

In the end the 3 hour and 53 minute classic will serve as memorable metaphor for Eckerl’s 20-year journey to 500 wins.

“I am just happy our players really dug in and didn’t give up, and we came up with a great win,” said the always humble Eckerl. “It seems like we’re starting to get things rolling right now, at the right time when it’s time to get to the playoffs.

“It was a good team win, both teams are excellent, and hats off to Curley; they are playing great baseball. It was a good high school game and it doesn’t get any better. I am thankful that I have great coaches and great players around me and that’s what made [500 wins] happen.”

Each team trotted out their ace for the showdown, as Curley’s Jake Michel matched-up with Calvert Hall’s Alex Kahn. Both struggled through some early wildness, but were both successful at working five solid innings. Michel allowed just two hits and two runs (one earned), while striking out eight and walking six. Kahn allowed just four hits and two runs with four strikeouts and two walks. 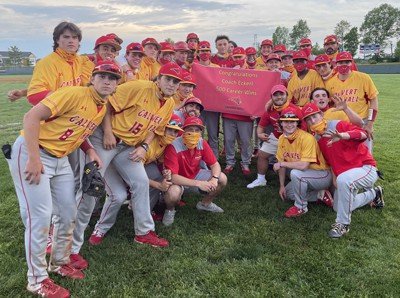 The Calvert Hall baseball team poses with coach Lou Eckerl (tucked behind a banner commemorating his 500th career win) after their 3-2, 13 inning win at Curley.

Kahn also scored the winning run, after drawing a one out walk in the top of the 13th and scoring on a two-out, bases loaded wild pitch by Curley’s Emilio Rodriguez. Ironically, the Cardinals (12-6 overall, 8-6 MIAA A) left the bases loaded in both the 11th and 12th innings before finally breaking the stalemate.

Curley’s best chance to win came in the bottom of the 10th when the Friars had runners on first and second with one out and Tristin Schoendienst at the plate.

Schoendienst smacked a single into right field which Cardinal right-fielder Scott Borgman fielded and threw a strike to the plate. Catcher Lamar King fielded the throw, blocked the plate and collided with Curley’s Cam Munk as he slid into the dish. King held onto the ball for the out but rolled over in obvious pain. Sensing an opportunity to steal the game winning run, Curley’s other baserunner, Ryan Edmonds, kept running and was stunned when King was able to hobble to his feet and make a second tag to end the inning. Curley (15-5, 9-5) also left runners in scoring position in the seventh and 11th innings.

Time will tell if Eckerl stays around long enough to climb any higher on that list, but there is one more mark he would like to top. Joe “Snooky” Binder holds the school record for wins at Calvert Hall (462-152), achieved in two separate stints (1972-74 and 1983-2004) as the Cardinals head coach. Eckerl is now 451-140 at The Hall, leaving him 12 shy of breaking the record for most wins at the school. To reach the top spot the 68-year old will likely need one more season.

Eckerl began his baseball coaching career at now defunct Cardinal Gibbons School, his alma mater, as the school’s JV coach and he took over the varsity job in 1980. He went 49-14 in two seasons at Gibbons and his 1982 team won the Maryland Scholastic Association (MSA) championship and was ranked No. 1 in Maryland, earning him Coach of the Year honors.

In 1982, Eckerl came to Calvert Hall to serve as the school’s athletic director. He spent a stint as the school’s head football coach and served as an assistant to Binder on the baseball team, becoming part of six of Binder’s 11 MSA/MIAA championship teams. He became the Cardinals’ head coach in 2002 and continued the title winning tradition with eight crowns of his own, including five straight from 2005-2009. He also won titles in 2012 and 2013, as well as in 2019 when he was named VSN’s Co-Coach of the Year. Including the one at Cardinal Gibbons, Eckerl has nine MSA/MIAA championships as a head coach.

His 2007 team won 33 consecutive games to set the state record for most consecutive wins and most wins in a single season. In 2016 he was inducted into Maryland State Association of Baseball Coaches (MSABC) Hall of Fame.

Eckerl does not ask his players to do anything he hasn’t done.

After a storied high school career in both football and baseball at Gibbons, he was a four-year letter winner in both sports at Juniata College (PA). In 1973 he was senior tri-captain on the football team and was named MVP of the Middle Atlantic Conference. That season, Juniata went 10-2 and played in the Amos Alonzo Stagg Bowl and finished as the NCAA Division III runner-up.

A running back, Eckerl led the team in rushing (763 yards) and scoring and still ranks in the school’s Top 10 in both single season and career rushing yards (1,431).

In baseball, he was a stand out pitcher and outfielder, serving as team captain as a senior. In 1998, he was inducted into the Juniatta College Athletic Hall of Fame.