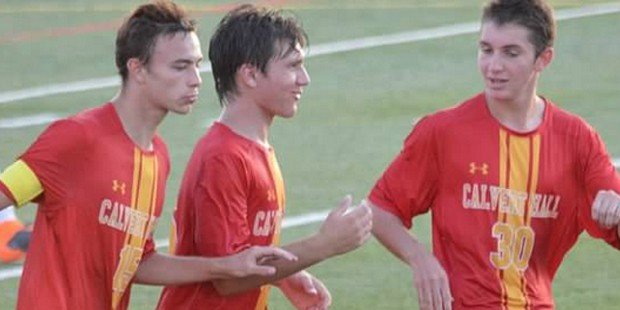 No. 19 Cardinals avoid OT with a last minute goal for the second straight game; No. 1 McDonogh wins opener

Calvert Hall’s Ben Bender broke a 1-1 tie, with just 46 seconds left in the second half, lifting the visiting Cardinals to a 2-1 MIAA A Conference victory over Archbishop Spalding, Thursday evening in Severna Park.

It was the second straight game in which the Cardinals (2-0, 1-0 MIAA) claimed a victory with a goal in the final minute. On Tuesday at home, Calvert Hall topped No. 6 Eastern Tech, 5-4, with a goal with just 25 seconds remaining.

Bender finished a cross from Dylan Buress. The Cardinals first goal also came in the waning seconds of the first half as Jake Belcher put Calvert Hall on top with 22 seconds to play before intermission.

Spalding’s Finn Beaubien pulled his team even in the 57th minute, with an assist from Collin Marcian. Spalding (2-1, 0-1 MIAA) then made three dangerous bids to get the go-ahead score before Calvert Hall got the game winner on a counter attack.

Elsewhere in the MIAA, defending champion McDonogh finally got its season underway with a 2-0 MIAA A league win over St. Paul’s in Owings Mills.

Kyle Brown and Mason Christian scored the goals and Kieran Baskett provided both assists. Coming off a 1-1 tie with No. 3 Mount St. Joseph in their opener, the Crusaders dropped to 0-1-1.

St. Joe was at No. 9 Archbishop Curley for a battle under the lights, but the game was postponed in the 42nd minute when thunder storms interrupted the action with teams in a scoreless tie. Also on Thursday, Gilman and John Carroll were postponed by the heat.