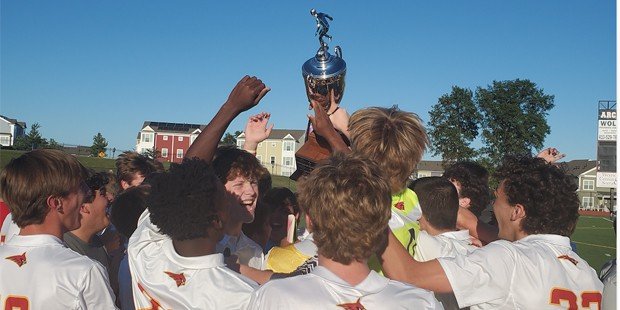 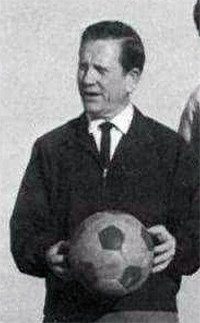 The late Bernie Reif during his days as Archbishop Curley’s first varsity soccer coach. His son Chris later starred for Calvert Hall and now both schools honor him with their annual playing of the Reif Cup.

In what has become Baltimore’s premier high school soccer rivalry game, top-ranked Calvert Hall broke the back of a feisty defensive effort by No. 19 Archbishop Curley, with a pair of second half goals, to down the Friars, 2-0, in their annual Reif Cup battle, Friday at Curley.

The Reif Cup, once known as the Alumni Cup, was re-named in honor of the late Bernie Reif, Curley’s first varsity soccer head coach who led the Friars to their first ever soccer championship in 1968. Lagter, he was also closely connected to the Calvert Hall program when his son Chris played for Cardinals and became the All-Metro Player of the Year in 1983. The schools designate one of their two MIAA A Conference matches each year as the Reif Cup, alternating between the two campuses each year.

Curley was the aggressor for the first 10 minutes of the game, but Calvert Hall gradually took control and began to apply significant pressure on the Curley defense. The Friars, led by center back Ricky Schissler, did an outstanding job a repelling those efforts for the first 60 minutes of the contest, and even created a few counter opportunities of their own.

When the Friars defense did falter slightly, in the first half, Curley sophomore goalkeeper Joe Yakim did an outstanding job of being the last line of defense. Yakim made five saves, most of a spectacular variety to keep the match even.

Curley, however, deploys a two goal-keeper system as Yakim splits games with senior Michael Caulkins who took to the nets after intermission. Caulkins made three saves of his own, but was placed in an incredibly difficult position, midway through the second half, when the Friars committed a foul in the box, creating a penalty kick opportunity for the Cardinals. Junior Ben Madore took the PK and calmly beat Caulkins inside the left post for the first score of the game.

Later, sophomore Ryan Belal chipped in a bounding feed from classmate Rocco Pastore to seal the deal for the Cardinals.

“I was very confident on that penalty kick today,” said Madore who also converted a penalty kick for the winning goal on Monday against Concordia Prep. “To win this special game is hard to put in words but we’re all very happy. Rocco Pastore [a sophomore midfielder] played great for us, and Curley played a great game.”

“I got a nice ball, a chip over the top from Rocco,” he said. “We have great chemistry, and we caught their defense off guard, and I was able to put it away.”

While Curley’s defensive effort was notable in their bid to pull the upset, Zinkand noted that his Cardinals had an excellent defensive performance as well.

“Kyle (Haller) and Ben (Ramsey) did a phenomenal job, and Will (Andrus) and Gabe (Glikin) were a big port of our attack,” said Zinkand. “Kudos to Curley. They pushed us to the limit. We created chances in the first half but didn’t finish any. We knew it was going be a tough a game coming in, and we had to keep our composure. We finally broke through with that penalty kick and the second score from Ryan (Bilal) was huge.”

Stitz acknowledged that the Cardinals deserved the winning result on Friday, but praised his team for their effort.

“We played very hard today as you would expect, in a game like this,” said Stitz. “It was a great effort, but we didn’t play well enough to beat a team of that caliber. They were the better team today, and they deserved to win. We did some good things, but we didn’t create enough chances.”

Both Zinkand and Stitz played for the programs they now coach and fully understand the tradition and importance of this rivalry.

“The Reif Cup tradition will provide memories for these players that will last a lifetime,” said Zinkand.

Stitz added, “The game has a special meaning because Mr. Bernie meant so much to us.”

It was the third straight Reif Cup win for the Cardinals who have forged in front in the all-time series, 10-9-1. The win was also significant because it allowed Calvert Hall to complete the first half of their MIAA A Conference schedule at 9-0-1 and well in front of the pack in the standings with 28 points. Next week the Cardinals will host Mount St. Joseph on Wednesday and visit No. 2 McDonogh, next Friday, to start the second half.

Curley dropped to 4-5 in the league where they sit in sixth place. The Friars will host Concordia Prep on Wednesday and travel to Archbishop Spalding next Friday.

Pictured above: Calvert Hall players celebrate with the Reif Cup trophy as they took the all-time lead in the series (10-9-1) with their 2-0 win over the Friars on Friday.