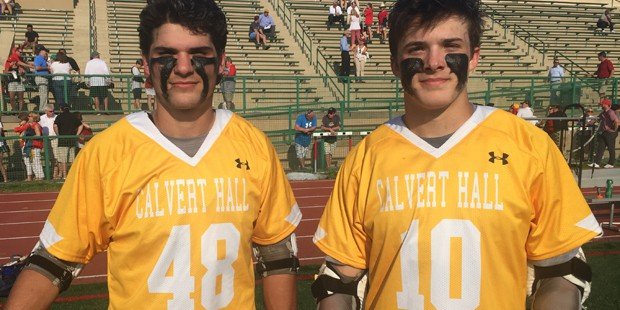 Herbert and Mitchell lead the way with a combined five goals and two assists; MIAA A playoff pairings set

With a first round bye at stake for the upcoming MIAA A Conference lacrosse playoffs, which get underway on Friday, the stage was set for a superb showdown between two preeminent arch-rivals, Calvert Hall and Loyola, Tuesday afternoon in Towson, and the host Cardinals took care of business.

With the field temperature on sun-baked Kelly Field soaring above 100-degrees, Calvert Hall (14-3 overall, 8-2) grew red-hot in the second half, scoring the final six goals of the game to break a 4-4 tie and secure a 10-4 victory and the second seed for the playoffs.

The second seed provides a first-round bye and a ticket into next Tuesday’s semifinal double-header at Towson University’s Johnny Unitas Stadium, along with top-seeded McDonogh, whom the Cardinals defeated in last year’s title game.

Calvert Hall began to make its move, on Tuesday, 4:48 left in the third quarter. Sophomore Cole Herbert scored his first goal of the game as he lowered his left shoulder, and bullied his way, as Chuck Thompson would say, “Right down Broadway,” into scoring range, and tickled the twine with an overhand laser to put the Cards up 5-4.

The tone was now set. After Calvert Hall senior goalie Liam Darragh stopped a point-blank shot from his doorstep with 2:11 left in the third, Herbert again attacked the Dons’ goal and scored his second unassisted goal to put the Cards up 6-4 with 1:05 left in the third.

After an exciting series of back and forth possessions, Calvert Hall junior midfielder Harrison Ewing kept the Cardinal momentum going, taking a great feed from senior middie Ryan Swain and calmly deposited a high left goal to extend the lead to 7-4 with 7:27 left in the game.

Any hopes the Dons had for a comeback were quickly squashed when senior defenseman Garrett Zungailia sprinted upfield with a 60-yard solo clear, and passed the ball to Herbert, who used a classic face dodge and fired a right-handed rocket to score his third goal of the game with to extend the Cards’ lead to 8-4 with just 3:35 left in the game.

The impressive Calvert Hall midfielders finished off a dominating second half performance when Sawyer found the back of the net with 2:40 remaining, and Herbert provided the exclamation point with his third goal of the game to finalize the 10-4 victory.

“These guys have learned to get the ball out of their stick quickly, and today it really paid off,” said Coach Kelly. “The defense can try to take to take this or that guy away, but we always have someone different ready to exploit that situation.”

Loyola got the early jump when senior attackman Ryan Dunn scored on a stellar across-the body shot to open the scoring, with only 1:43 elapsed in the first quarter.

Less than a minute later, Calvert Hall junior midfielder Jack Sawyer pulled the Cards even off a feed from fellow junior line-mate Grant Mitchell. Loyola sophomore midfielder Jack Koras then grabbed a pinpoint pass from junior middie Alex Breschi, and nestled in a left handed beauty to put the Dons up 2-1.

Loyola continued to dominate play in the first quarter, outshooting the Cards 16-4. Darragh defended the onslaught with five saves, but the Dons continuously missed just-wide with several heat-seeking missiles.

Calvert Hall senior attackman Jacob Kelly pulled the Cardinals all square once again after grabbing a feed from freshman midfielder Ethan Long, and depositing a full speed left hander with 5:20 remaining in the 1st.

In the second quarter Calvert Hall showed a glimpse of what was about to come as Sawyer deposited a feed from Herbert to put the Cards up 3-2. Junior middie Grant Mitchell then used a nice pass from senior attackman Zach Green to extend the lead to 4-2 with 3:46 remaining in the half.

Loyola senior attackman Conner Hume then stunned the Cardinals and the crowd, with a superb heads-up play. He deftly captured a loose ball on a failed Calvert Hall clear, quickly found senior midfielder Alex Reid, and with only 13 seconds left in the half, the Dons cut the lead to 4-3.

The Chestnut Avenue faithful erupted in joy when Don senior captain and midfielder Liam Bateman used a nifty face dodge to unleash a high-left tally to tie the score at 4-4 with 7:35 left in the 3rd. The excitement in Towson was palpable, and the rivalry was delectable.

“In one word – emotional,” said Kelly with a crackling voice. “With Dave not here, I really miss him. It’s my son’s senior year, and I just want this journey to continue.”

Herbert (3goals, 1 assist) and Mitchell, quickly becoming known as the “Bash Brothers,” were asked about their physical approach to offensive.

Said Herbert, “Every time I start a dodge, I put my shoulder down, start a bull dodge, get past them with my speed, and they weren’t sliding to me today so I took advantage of it.”

Mitchell (2goals, 1 assist), a natural righty who has developed a potent left hand, said, “I just took advantage of what they gave me today. I was able to get to my left, created some space, and was able to get my shot off.”

Also on Tuesday, McDonogh handled Gilman, 7-3, in their rivalry game, to eliminate the Greyhounds, and BL’s win over St. Paul’s did the same for the Crusaders. Gilman and St. Paul’s finished their seasons tied for seventh at 4-6 in the league.

Loyola and Boys’ Latin both ended up with 7-3 league marks, but the Dons won the head-to-head to gain the tie-break.

St. Mary’s topped Mount St. Joseph, 14-10, in its regular season finale, to claim the fifth seed and earn a trip to Boys’ Latin on Friday. BL defeated the Saints, 11-6, in Annapolis just two weeks ago.

Severn, which had already wrapped up its season with a 5-5 record, held onto the sixth seed and will travel to Blakefield. The Dons and Admirals battled in Anne Arundel County in mid-April and Loyola escaped with 6-5 decision.

In the semifinals, McDonogh will draw the Boys’ Latin/St. Mary’s winner and Calvert Hall will face the Loyola/Severn survivor.

The final day of the regular season also saw John Carroll close its campaign with its first MIAA A Conference victory, defeating Archbishop Spalding, 9-8. This followed a near miss by the Patriots in their last game, when they fell to Gilman, 9-8.